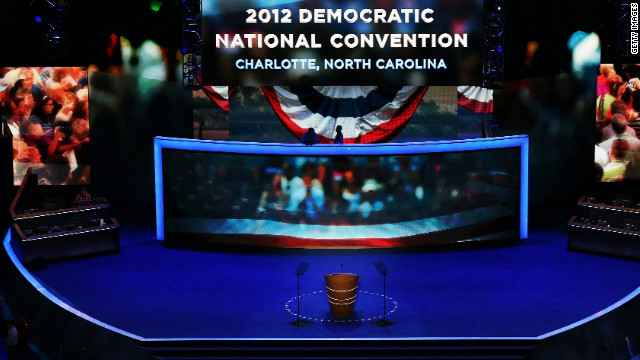 The Democratic platform also contains language endorsing same-sex marriage for the first time, a move that brings the party's official stance in line with that of the president, who said for the first time in May that he supports marriage rights for gays and lesbians.

The document spells out accomplishments made over the past four years, but argues for a second Obama term by saying more work remains on fixing the economy and making the country more secure. It also pins the blame for high debts and a diminished jobs outlook on former President George W. Bush's administration – a tack that many Democrats have used this week in defending Obama's record.

"Four years ago, Democrats, independents, and many Republicans came together as Americans to move our country forward," the platform reads. "We were in the midst of the greatest economic crisis since the Great Depression, the previous administration had put two wars on our nation's credit card, and the American Dream had slipped out of reach for too many."

"Today, our economy is growing again, al-Qaeda is weaker than at any point since 9/11, and our manufacturing sector is growing for the first time in more than a decade. But there is more we need to do, and so we come together again to continue what we started," the platform continues.

Democrats claim in their platform that Obama has cut taxes by $3,600 for a "typical family," and vows to keep taxes at their current rate for Americans earning less than $250,000 per year. The platform says Democrats will "always vigorously oppose the type of tax reform supported by Mitt Romney," which they say would place an unfair burden on middle class families while benefiting the wealthy.

Social issues, which occupy a smaller portion of the Democrats' platform, align closely with traditional liberal viewpoints. On abortion, the platform states that Democrats "strongly and unequivocally" support Roe. v. Wade, the Supreme Court decision allowing abortion. Democrats write that abortion is right every woman should be afforded.

"We oppose any and all efforts to weaken or undermine that right," the platform states. "Abortion is an intensely personal decision between a woman, her family, her doctor, and her clergy; there is no place for politicians or government to get in the way."

And on same-sex marriage, the party writes it supports "marriage equality" and opposes "discriminatory federal and state constitutional amendments" that would prohibit gays and lesbians from marrying.

Democrats also write they support repealing the Defense of Marriage Act, a law signed by President Bill Clinton in 1996 that defined marriage as a legal union between one man and one woman. Clinton is scheduled to speak at the Democratic National Convention in Charlotte on Wednesday.

Other issues included in the official party document are a commitment to reducing the influence of monied special interests in politics, a pledge for comprehensive immigration reform that "brings undocumented immigrants out of the shadows and requires them to get right with the law, learn English, and pay taxes in order to get on a path to earn citizenship," and a staunch defense of Obama's health care law, which the platform says has improved the lives of millions of Americans.

"No law is perfect and Democrats stand willing to work with anyone to improve the law where necessary, but we are committed to moving forward," the platform reads.