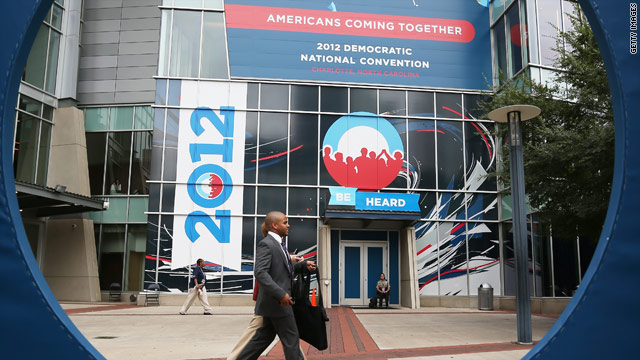 Obama campaign: DNC is on, 'rain or shine'

Charlotte, North Carolina (CNN) - Officials with the Democratic National Convention said Tuesday that they will have a contingency plan ready in case storms interrupt their plans to hold Thursday evening's convention activities outside.

But "we are rain or shine going forward," said a senior Obama campaign official who spoke Tuesday with CNN reporters covering the convention.

"There are too many organizational benefits to being outside. The fact that we've already given away 65,000 tickets is probably good reason to have" it at the stadium, the official added.

Tuesday's forecast for Thursday predicted a chance of rain and thunderstorms in the late afternoon and early evening, the day when the DNC moves to Bank of America Stadium. President Barack Obama is to accept his party's nomination and deliver a speech that evening. Convention activities earlier in the week will take place at the Time Warner Cable Arena.

The campaign official suggested rain alone would not hold up their plans for outdoor events later this week.

"Unless someone tells us there's a threat to public safety, then we'll make a different call," the campaign official said. "But we're going to go as far as we can. If it's a little rain, we'll be OK. Rain or shine, we're going."

Republican National Convention officials shortened their convention in Tampa, Florida last week as forecasts showed Tropical Storm Isaac on a path towards the host city. Isaac later became a hurricane and made landfall in Louisiana.