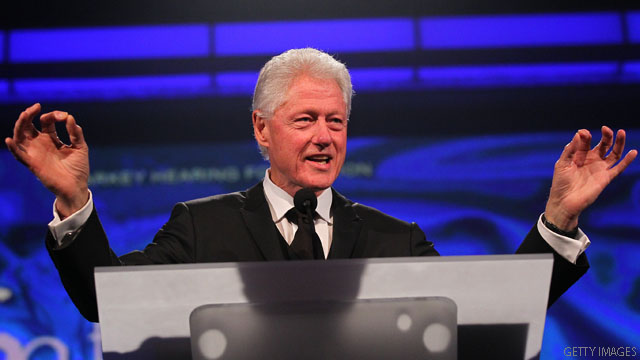 (CNN) – President Barack Obama's campaign said Tuesday they had no qualms about what former President Bill Clinton might say in his speech at the Democratic National Convention, despite not having seen his remarks a day before he's scheduled to deliver them in Charlotte.

"President Clinton has been in close contact with campaign, he's working on his remarks, and when he's done I'm sure we'll see them," Obama campaign press secretary Jen Psaki told reporters aboard Air Force One. "We have absolute confidence about what he's going to say. Who better to deliver a message to the American people about the choice between Obama and Romney-Ryan?"

Democrats are confident Clinton can help woo voters who remember a healthy economy that existed during his administration. Clinton remains the most popular ex-president, and his wife, Secretary of State Hillary Clinton, gets consistently high marks for her performance in Obama's administration.

But Clinton doesn't always stay on message when advocating for Obama, including in May when he called Mitt Romney's business career "sterling" in an interview with CNN's Piers Morgan.

In the interview, Clinton said there was no question Romney was capable of performing the "essential functions" of the presidency, adding: "The man who has been governor and had a sterling business career crosses the qualification threshold."

Romney's campaign has used the clip in promoting their candidate, and recently launched a website, sterlingbusinesscareer.com, that highlights the GOP presidential nominee's economic credentials.

And Clinton's convention speeches haven't all been home runs. His speech introducing 1988 Democratic nominee Michael Dukakis was panned for being long-winded and boring, though his remarks as a presidential nominee were more warmly received.

The relationship between Obama and Clinton remained frosty long after the 2008 Democratic primary contest, which saw a bitter series of attacks between then-Sen. Obama and Hillary Clinton, who was also running for the presidential nomination.

Obama and Bill Clinton seemed to repair their relationship following the 2010 midterm elections, which gave Democrats a drubbing and allowed Republicans to take control of the House of Representatives.

Clinton currently stars in a television spot for the Obama campaign, drawing a comparison between the president's economic plan and the measures proposed by his GOP rivals.

"This is a clear choice. The Republican plan is to cut more taxes on upper income people and go back to deregulation. That's what got us in trouble in the first place," Clinton says in the ad. "President Obama has a plan to rebuild America from the ground up, investing in innovation, education, and job training. It only works if there is a strong middle class."

He later adds: "That's what happened when I was President. We need to keep going with his plan."