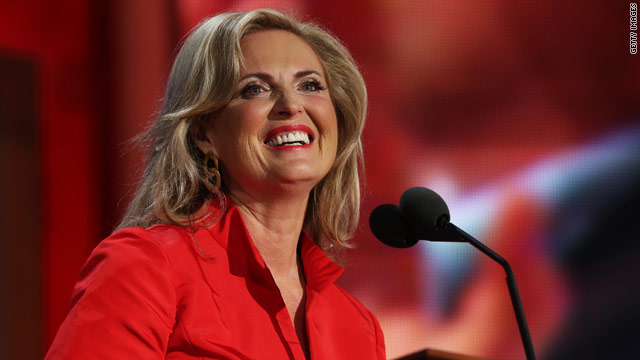 (CNN) - They are seen as their husbands' top surrogates, and the day after first lady Michelle Obama made the case for her husband at the Democratic National Convention, Ann Romney traveled to the battleground of Ohio Wednesday to make the case for the Republican challenger.

Her husband, Mitt Romney, is attuned to women's struggles, especially their economic struggles, and, Ann Romney said, "I know that Mitt will be there for you."

"Women, you need to wake up," she told the largely female audience at a "Women For Mitt" rally in Findlay, Ohio. "Women have to ask themselves who is going to... be there for you. I can promise you, I know that Mitt will be there for you, he will stand up for you, he will hear your voices, he knows how to fix an economy, he's a can do kind of guy, he's a turnaround guy."

The latest CNN/ORC International Poll, released Tuesday, showed a "gender gap" between the two candidates: 54% of women surveyed said they were leaning towards or supporting Obama, while only 42% said the same of Romney. Asked who is more in touch with the issues facing women, 56% of all voters surveyed named Obama and 36% named Romney.

Ann Romney said that on campaign swings around the country, she and her husband have "heard about how many women are struggling in this economy more than the men are."

While Ann Romney sometimes campaigns at her husband's side, on Wednesday she was on the stump in Ohio as her husband was in Vermont preparing for the series of presidential debates this fall.

Michelle Obama, meanwhile, had a series of appearances in Charlotte, North Carolina, where Democrats were gathering for their party's convention, and where her husband was slated to arrive later in the afternoon. He is to accept his party's nomination for reelection on Thursday.

In her Tuesday evening primetime address, Michelle Obama touched on the issues important to women voters. In addition to talking about women's health care, she told the story of her husband's grandmother, who Michelle Obama said professionally "moved quickly up the ranks, but like so many women, she hit a glass ceiling."

"When it comes to rebuilding our economy, Barack is thinking about folks like my dad and like his grandmother," the first lady said. "He's thinking about the pride that comes from a hard day's work. That is why he signed the Lilly Ledbetter Fair Pay Act to help women get equal pay for equal work."

On the campaign trail Wednesday, Ann Romney told an often relayed story that after her husband's 2008 presidential race, she did not want him to reenter the ring.

"My husband was being demonized, lied about," she said, "and now we're really getting it, as you know."

And Ann Romney seized upon a metaphor which her husband and Obama have tossed around in recent days on the stump.

The GOP presidential candidate likened Obama's record on unemployment as "a coach that's 0 and 23 million" and said that "it's time to get a new coach." On Monday, Obama fired back, telling voters in Ohio to "punt" Romney and his running mate away. "It won't work. It won't win the game. You don't need that coach. That's a losing season," the president said.

Ann Romney revived the metaphor, telling supporters at her rally that, "It's time to fire the coach."