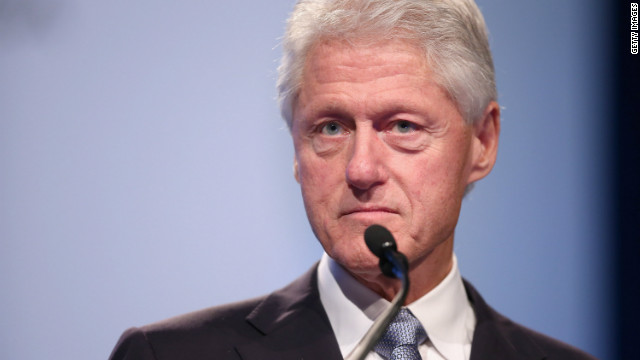 BREAKING: DEMOCRATS TO UPDATE PLATFORM WITH JERUSALEM REFERENCE… Democrats will update their party's platform Wednesday evening at their convention to include a reference to Jerusalem being the capital of Israel, which was not included in their platform this year but was in previous platforms, Democratic sources told CNN. The vote is expected to take place by acclamation shortly after the convention is gaveled in to order at 5 p.m. ET, the sources said. – Jessica Yellin

THE TIMES THEY ARE A-CHANGIN': Obama-Bill Clinton relationship unthinkable four years ago: Over the past few months, Bill Clinton has provided the Obama campaign with some accidental aggravations, displaying an unsettling tendency to drift off-message and derail narratives. He's used language that seemed to put some daylight between his and Obama's positions on tax cuts while the spotlight was on the president's policy, and he praised Mitt Romney's business record while it served as a central line of attack. Yet Obama aides say they're not concerned. – Rebecca Sinderbrand

99 LUFTBALLONS - OR NOT: Thursday’s DNC proceedings will be moved indoors due to weather... A Democratic official on background tells CNN’s Paul Steinhauser that there will be a festive conclusion to Thursday night’s DNC session, but there will be no iconic balloon drop.

TRAIL TRIVIA
(Answer below)
In both 2012 and 2008 the Republican and Democratic conventions have fallen on back-to-back weeks. When was the first time this happened?

It’s on, just not at Bank of America Stadium.

Our first question from this morning’s Gut Check was answered shortly after we published. President Barack Obama will accept the presidential nomination at the Time Warner Cable Arena, instead of the larger and outdoor Bank of America Stadium. A convention official cited the weather and the concern for public safety as the reason why they decided to keep it indoors.

– 65,000 people hoping to see Obama speak in person – will have to watch from home.
– It will be a packed house (There was speculation, knocked down by Obama campaign officials, that they would have had trouble filling the stadium).
– And it will be a crisper shot of Obama for his production team, which will surely capture every moment for a campaign commercial.

The president, we are told, will hold a conference call with the 65,000 people who won’t get to see him speak.

And now on to tonight …

While this convention is designed to help the president win in November, this evening is about former President Bill Clinton, who is the headliner and will put Obama’s name into nomination. The Obama campaign is hoping that Clinton, in some ways, can help bolster the closing argument that the president deserves four more years.

A senior Obama campaign official sought to draw similarities between the Clinton and Obama presidencies saying that both were under attack by Republicans as they charted a path for the future that included: reforming government, cutting government waste, focusing on education and healthcare and making investments in innovation.

The Democrats’ messaging points will be the same as last night: the president made politically unpopular, but correct decisions on issues such as health care and the auto rescue, while also making an appeal to middle class voters. In addition to Clinton, the Obama campaign has lined up UAW President Bob King, former Costco CEO Jim Sinegal and former CarMax CEO Austin Ligon to also make the president’s case – an interesting contrast of big labor and big business.

And Massachusetts Senate candidate Elizabeth Warren and Sandra Fluke will also speak in primetime, voices which may help the president with the base and women voters.

Maryland Rep. Chris Van Hollen, who serves alongside vice presidential nominee Paul Ryan on the House Budget Committee, will use his speech tonight to compare and contrast the president’s deficit reduction plan to Ryan’s proposal. Interestingly, Ryan praised Clinton during an interview with CNN’s Piers Morgan today, but said that Obama hasn’t followed the same path.

"President Clinton worked with Republicans in Congress to have a budget agreement, to cut spending,” Ryan said. “President Obama, a gusher of new spending and only demagoguery from those of us who have offered solutions.”

The game is on. While the Obama campaign seeks to embrace the Clinton legacy, Republicans will try to exploit any differences between the two men. We will be watching closely to see what Clinton has to say this evening.

Leading Politico: Obama speech moved indoors
Democratic officials confirm to POLITICO that President Obama's prime time address will be moved indoors to the Time Warner Center. The Thursday address was scheduled to be at Bank of America stadium — an outdoor venue with more than 70,000 seats. But forecasts are predicting thunderstorms, forcing a last minute change in venue. – Byron Tau

Leading The New York Times: At the Democratic Convention, an Emphasis on Social Issues
At times, it seemed as if every speaker on the first night of the Democratic National Convention was touting same-sex marriage. – Peter Baker

- FLOTUS's message: Kids vs. Super Pacs -
MICHELLE OBAMA AT A CAMPAIGN EVENT IN NORTH CAROLINA: “Do we want our elections to be about who buys the most ads on TV? Do we want our kids and grandkids to walk away from this election feeling like ordinary hardworking voices can no longer be heard in this country? Or are we going to show our kids that here in America we all have an equal voice in the voting booth?”

- On the stump, no shying from Romney-Ryan plan -
PAUL RYAN AT A CAMPAIGN EVENT IN IOWA: “It is not enough for us to simply criticize and point out the failures of the last four years. We need to do that so we don't repeat those mistakes. But we owe you solutions. We owe you an alternative. We want to respect you by giving you the choice that you know what you want this country to be. That’s what the Romney-Ryan plan for a stronger middle class is all about.”

- Fluke previews convention speech, ‘Women feel like they are under attack’ -
SANDRA FLUKE IN AN INTERVIEW WITH CNN’S “STARTING POINT”: “I don't think it's just a disagreement. The frame is less important than what policies we're seeing. I do think a lot of women feel like they are under attack. When we look at the facts, the last two years, quantitatively, have seen record numbers of bills in the house and legislatures across the country trying to limit access to reproductive health care.”

Ana Marie Cox (‏@anamariecox)
TX delegates tell me Mayor Castro has improved remarkably as a speaker since their state convention June. "He was boring." #DNC12

Byron York (@ByronYork)
Talking with '08 Obama voters in NC, it's pretty clear many have abandoned the president. http://ow.ly/dtMFg

Christina Bellantoni (‏@cbellantoni)
Rain or shine, not so much. Final night of #dnc2012 will remain indoors, and won't be in Bank of America stadium.

Robert Yoon (@yoonCNN)
Everything in this tweet is technically true: Al Gore is here in Charlotte & he sat down w/ me for a 1-on-1 interview http://on.cnn.com/Qm57Gk

This year is the fifth time that the two major party conventions have been held on back-to-back weeks. This is the second election season in a row that this has happened, as it happened in 2008, too.

Prior to that, it happened in 1956 and 1916. The first time that conventions were in back-to-back week happened was in 1912 – the election that saw incumbent William Howard Taft face off with Democrat Woodrow Wilson. This is the same year that Theodore Roosevelt ran as the Progressive Party nominee.

As for which party goes first, that is dictated more by historical precedent than a steadfast rule. Since 1956, the party that controls the White House has gone second.

Congrats to David Daniel (@CNNLADavid) for correctly answering today’s Gut Check trivia question. It took a few tries – for multiple people (we are talking to you @SteveL3877) – but Daniel was the only person to guess the correct answer. Congrats!