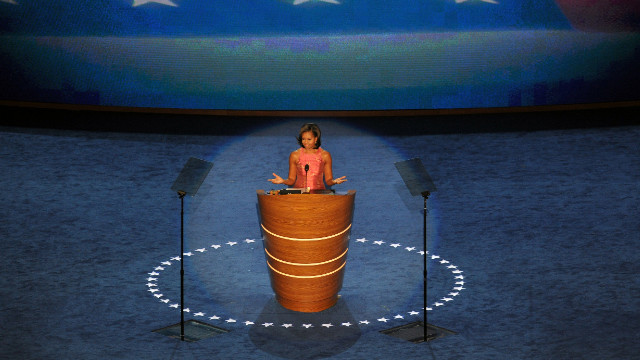 Editor's Note: This is a special morning edition of CNN's Political Gut Check which will come out twice a day for the duration of the political conventions. For early access to Gut Check, download the CNN/Time Floor Pass app.

DEVELOPING: In North Carolina, student insurance costs rise under Obamacare... President Obama's health care reform law, which expands preventative care and lets young people remain on their parents' health insurance plans well into their 20s, is a central part of his election year pitch to college students. … But as the president fights to keep the conservative-leaning state in his column this November, education officials here are complicating his campaign message by citing "Obamacare" as a reason for the rising cost of student health insurance plans on campuses from Asheville to Wilmington. – Peter Hamby

CNN FACT CHECK: About those 4.5 million jobs... "Despite incredible odds and united Republican opposition, our president took action, and now we've seen 4.5 million new jobs," San Antonio Mayor Julian Castro, the party's keynote speaker, said. … The figure of 4.5 million jobs is accurate if you look at the most favorable period and category for the administration. But overall, there are still fewer people working now than when Obama took office at the height of the recession.

Michelle Obama was the speech that caught our eye last night - for its content and its delivery.

She plugged into a room that had already been super-charged by the likes of Newark, New Jersey, Mayor Cory Booker, Massachusetts Gov. Deval Patrick, and Ohio Gov. Ted Strickland; and delivered a speech that emphasized her husband's roots.

But we were told hours before Michelle Obama's address that she "will not do contrast, she'll focus on her story" in her speech. While Michelle Obama did tell her husband's story, at times, in fact, she was contrasting (President Obama “believes that women are more than capable of making our own choices about our bodies and our health care.")

Like Ann Romney a week earlier, Michelle Obama proved she is one of her husband's best surrogates.

The keynote speaker, Julian Castro, used his time on the national stage to weave his own personal narrative into a speech that called for a second Obama term. While his speech did not bring the house down, the 37-year-old Castro is no longer a relatively unknown mayor of San Antonio.

All of the speakers on this opening night were greatly helped by the audience - hungry perhaps, politically depressed maybe, longing likely for the feeling of 2008. It has been a difficult four years for Democrats as Republicans have made great gains in organizing, fundraising and overall grassroots enthusiasm. Republicans control the House and are on the verge of taking back the Senate. But last night Democrats seemed to have recaptured some of that political magic, at least for one evening.

So as we wake-up for day two of the convention, here are the five things we will be looking for in what will be a long, long night as the convention is scheduled to gavel into session at 5 p.m. ET and not end until 12:30 a.m. ET.

1. The stadium or the arena? Where will President Barack Obama and Vice President Joe Biden be on Thursday evening? They are scheduled to formally accept the Democratic nominations at Bank of America Stadium, but convention organizers are concerned about the weather. A call on what venue to use, the stadium or Time Warner Cable Arena, was originally scheduled to be made Tuesday morning, but organizers were able to push it back. We will know the answer this morning, perhaps at the same time Gut Check is published.

2. The Bill factor. What will he say? How will he say it? How long will he speak? Former President Bill Clinton is the headliner tonight and we expect him to give a spirited defense of President Obama's time in office, while trying to tear down Mitt Romney. He will put the president's name into nomination, a bit of symbolism designed to excite the Democratic base and at the same time trying to put to rest the stories of Clinton-Obama friction.

3. Is Fluke a fluke? Sandra Fluke has become a household name after a very public fight with Rush Limbaugh over insurance coverage for contraception. Instead of shying away from the spotlight, Fluke has embraced it. She is a regular on the TV circuit, but tonight she is in primetime, an opportunity to either rise to the occasion or deliver a lackluster speech. A crowd-stirring speech would go a long way in helping enhance her long term political future.

4. The voice of the base. Elizabeth Warren leaves the Massachusetts campaign trail today to campaign on national television. She is a favorite of the Democratic base and is locked in one of the closest Senate races of the year against incumbent Sen. Scott Brown. We expect her to deliver a red meat address that will talk about the need for a second Obama term as well as the need to help Democrats keep control of the Senate. To the politically inexperienced, what Warren will be saying is "Help Me!" What say you Mr. Brown?

5. The Energy. Will Democrats be able to sustain the same level as energy tonight as they did last night? The room was electrified Tuesday, but can Democrats keep up the enthusiasm?

Leading CNNPolitics: Obama praised; Romney pilloried at Democratic convention
A Democratic National Convention vital to President Barack Obama's re-election bid will hear from former President Bill Clinton on Wednesday after the first lady and other opening night speakers urged supporters to fight for a man they portrayed as a strong leader committed to equal opportunity for all. – Tom Cohen

Leading Drudge: Memories Of The Future
First lady Michelle Obama lovingly praised her husband Tuesday night in a prime-time Democratic Convention speech as a devoted husband and caring father at home and a "man we can trust" to revive the nation's weak economy as president, beckoning the country to return him to the White House despite agonizingly slow recovery from recession. – David Espo and Matthew Daly

Leading HuffPo: Harry Reid Speech At 2012 Democratic Convention Slams Romney On Tax Returns
Senate Majority Leader Harry Reid (D-Nev.) on Tuesday returned to the theme that threw Mitt Romney off balance for several weeks this summer, hammering the Republican presidential candidate for refusing to release his tax returns. "Never in modern American history has a presidential candidate tried so hard to hide himself from the people he hopes to serve," Reid said during his evening speech here at the Democratic National Convention. – Ryan Grim

Leading The New York Times: Michelle Obama Tops Opening Night for Democrats
Democrats had two simple messages for voters: Mitt Romney does not get it, and President Obama does. The main attraction was Mr. Obama’s lead character witness: his wife, Michelle. – Jim Rutenberg

Leading CNN Money: Housing improves in hard-hit swing states
At long last, the housing market is improving in Nevada, Florida and other important swing states that were some of the hardest hit during the downturn. But that probably won't win President Obama a lot of points at the election polls, according to some experts. – Tami Luhby

Randy Archibold (@rcarchiboldNYT)
"I didn't buy a line of it," Charles Krauthammer on Fox News re Michelle Obama speech

Jen Psaki (@jrpsaki)
Why America loves the FLOTUS–genuine, authentic, passionate and not to mention brilliant and beautiful

Andrea Saul (@andreamsaul)
Surprised to learn from Dems "the gov't is the only thing we all belong to." Try again, gov't belongs to us. #AreYouBetterOff

In both 2012 and 2008 the Republican and Democratic conventions have fallen on back-to-back weeks. When was the first time this happened?