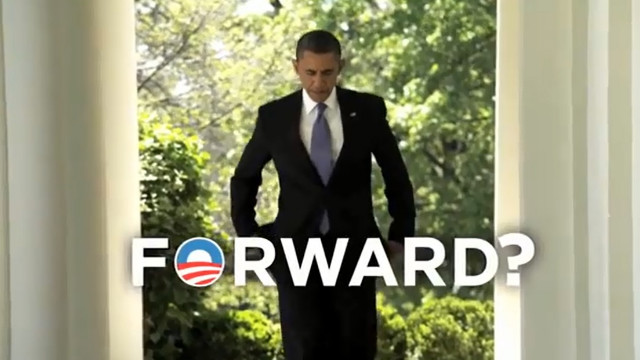 (CNN) – The conservative super PAC Crossroads GPS said Wednesday it would spend upwards of $6 million to air a television spot knocking President Barack Obama’s record on the economy, saying his policies are the opposite of his campaign’s ‘forward’ motto.

“President Obama says he’ll move us forward,” a narrator says in the spot. “But where’s he taken us so far? America’s worst economic recovery ever. 23 million of us without full time work. Family incomes down. Forty percent living paycheck to paycheck. And Obamacare’s new tax on middle class families. All while Obama racked up 5 trillion more in debt. Is that really forward, or backward?”

The ad’s opening shot of Obama walking through the White House colonnade is similar to a shot used in the president’s own political ads, and the ‘forward’ theme is a riff on his campaign’s slogan, which was unveiled last Spring.

The ad hits Heitkamp for her support of Obama’s health care law, saying it increases federal spending at a time of skyrocketing federal debt.

Crossroads said it would spent $110,000 to air the ad in North Dakota.