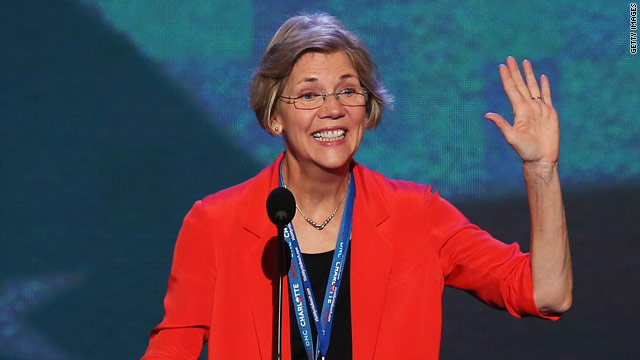 Warren, a professor at Harvard and former head of a consumer protection agency under Obama, is seaking to unseat Sen. Scott Brown in a race receiving a significant amount of national attention and money.

Excerpts of her remarks, as released:

"I grew up in an America that invested in its kids and built a strong middle class.

"That allowed millions of children to rise from poverty and establish secure lives.

"An America that created Social Security and Medicare so that seniors could live with dignity.

"An America in which each generation built something solid so that the next generation could build something better.

"But for many years now, our middle class has been chipped, squeezed, and hammered."

"He believes in a country where nobody gets a free ride or a golden parachute.

"A country where anyone who has a great idea and rolls up their sleeves has a chance to build a business, and anyone who works hard can build some security and raise a family.

"President Obama believes in a country where billionaires pay their taxes just like their secretaries do - and I can't believe I have to say this in 2012 – a country where women get equal pay for equal work."

"We are tough, resourceful and creative. If we have the chance to fight on a level playing field - where everyone pays a fair share and everyone has a real shot – then no one can stop us.
"President Obama gets it – because he's spent his life fighting for the middle class.

"And now he's fighting to level that playing field – because we know that the economy doesn't grow from the top down, but from the middle class out and the bottom up.

"That's how we create jobs. And reduce the debt.

"He wants to give tax cuts to millionaires and billionaires...but for middle-class families who are hanging on by their fingernails?

"Mitt Romney wants to give billions in breaks to big corporations – but he and Paul Ryan would pulverize financial reform, voucher-ize Medicare, and vaporize Obamacare."