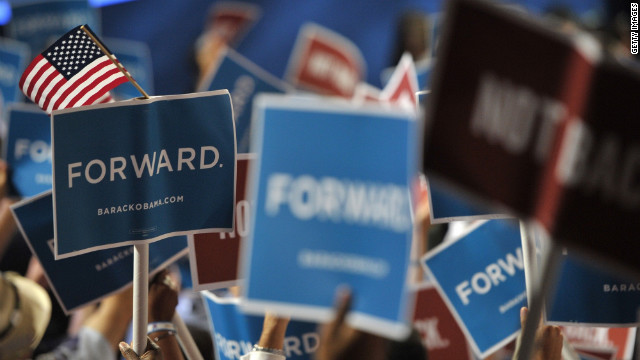 For Democrats, 2016 jockeying begins over breakfast

Charlotte, North Carolina (CNN) – For just a couple of hours on Wednesday morning, the center of gravity in Democratic politics was a steamy Marriott parking lot in New South suburbia, many miles from the security-enclosed commotion of the Democratic National Convention in uptown Charlotte.

And there were muffins.

Three Democrats who may or may not be thinking about possibly making a decision about seeking the presidency in 2016 - Virginia Sen. Mark Warner, Minnesota Sen. Amy Klobuchar and Maryland Gov. Martin O'Malley - visited a breakfast meeting here hosted by Iowa's convention delegation.

The television cameras in attendance signaled, however, that this wasn't just breakfast.

In a series of brief speeches to the small crowd, none of three politicians stated what was obvious to everyone sipping their coffee: That they were pondering a White House bid in 2016 and wanted a head start on making inroads with some key Democratic activists who hold sway in Iowa's pivotal caucuses. Respect must be paid.

To acknowledge such a thing would be crass, after all, since Democrats are here in the Charlotte area to re-nominate the guy who actually is president: Barack Obama. And indeed, the president's re-election fight was the main focus of their remarks to the breakfast crowd.

But the hyperactive reality of modern-day politics dictates that the 2016 presidential campaign will begin in earnest - in ways visible and not - on the morning after Election Day this November.

The potential presidential candidates and the almost two dozen national and Iowa reporters who showed up to cover them were all in on the joke.

Here's how the delicate dance worked on Wednesday:

Reporter 1: "Senator, are you thinking about it?"

Warner: "I'm not thinking about anything other than getting Barack Obama re-elected and then dealing with this debt and deficit."

Reporter 2: "So why come to the Iowa breakfast? Why not South Dakota?"

Warner: "Because they invited me."

Warner smiled coyly throughout the whole exchange, as did Klobuchar, and then O'Malley after her. All of them were simply invited to this routine, nothing-to-see-here breakfast, they explained, and were excited to help Obama defeat Mitt Romney this fall.

While they demurred about their own ambitions, their speeches to the delegation were peppered with shameless nods to Iowa – the livestock, the quirky landmarks, and, of course, the cherished tradition of the caucuses.

"I can see Iowa from my porch!" Klobuchar, the Minnesotan, exclaimed in her speech (a speech, it should be noted, that brought more than a few audience-members to their feet in applause).

Each of the Democrats lingered with reporters before heading back into uptown Charlotte, happy to indulge in the obvious line of questioning.

Their aides, normally type-A political staffers conditioned to hustle their bosses away from the media, nonchalantly looked on as reporters asked them question after question about Iowa.

O'Malley fondly remembered his younger days working as a volunteer on the campaigns of Gary Hart and visiting places like "Keokuk and Muscatine and Davenport."

"In Iowa, one of the things I learned is just how tightly knit rural communities are," said the former big-city mayor who learned his politics in the bowels of Baltimore. "Iowa is a great state with really good people."

O'Malley, who recently launched a political action committee and appears to be the most serious of the 2016 bunch about running, stayed in the parking lot for almost half an hour after the breakfast to chat with the delegates. His nationally televised convention speech the previous night, it seemed, had earned him some picture-hungry fans.

At one point, the handsome and perfectly appointed governor - green tie, white shirt, dark suit – was immersed in conversation with a scraggly-haired man wearing white tube socks with his Birkenstock sandals.

Warner, a denizen of the Washington suburbs who made a fortune investing in tech companies like Nextel, was asked if his business executive shtick would play well in the Midwest. He went out of his way to point out that he won his first statewide race in 2001, in part, by reaching out to voters in Appalachia.

"Where I won the governorship was actually not so much in northern Virginia, it was in rural Virginia," Warner noted.

A few moments later, Warner was tapped on the shoulder by Jennifer Jacobs of the Des Moines Register, who prefaced her own 2016 question with four words that should be catnip to any ambitious politician: "Sir, we're Iowa reporters."

He was happy to engage.

And it's likely that two more notable Democrats scheduled to join the Iowa breakfast tomorrow morning - New York Sen. Kirsten Gillibrand and Montana Gov. Brian Schweitzer – will be eager to play the game as well.