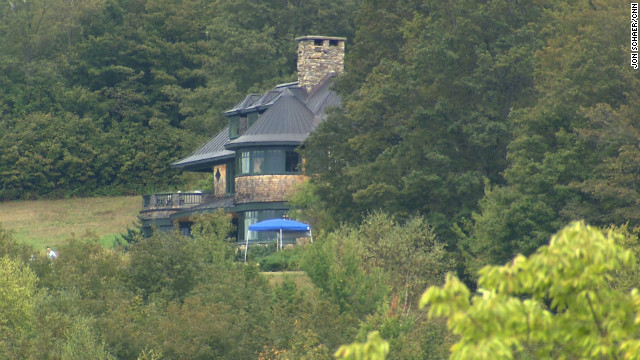 Nestled high atop a tree-covered hillside overlooking Vermont's Green Mountains, Mitt Romney is preparing for his upcoming debates with President Obama in a sprawling mansion, assessed at $3.9 million, according to local officials.

The driveway to the home, which is owned by Romney's former Lt. Governor Kerry Healey, is guarded by Vermont state troopers in the midst of a steady traffic flow of news crews and neighbors on horseback.

"I'd like there to be a little more excitement but there doesn't seem to be," Healey's next door neighbor, Bob French said.

Still French said it's the most action he's seen at the home in months. The Healey family uses the residence as a second home, French added.

"Only there twice a year. Sits empty otherwise," French said.

Described as a "mansion," Healey's home is 6500 square feet and "boasts six bedrooms, five full baths, two half baths, three fireplaces, five porches, and an unmarred view of the surrounding Green Mountains," according to an article in the local "Valley News" newspaper.

Kathy Atchibald, the township clerk in West Windsor, confirmed the home's assessed value to CNN. She cautioned that price tag is not unusual for the neighborhood.

"We have quite a few up there that assess high or higher," Atchibald said.

It's a zip code that also offers privacy. Shrouded by a lush grove of large trees, Healey's home is not visible from where the end of her driveway meets the public road.

Reporters in search of another view of the residence may not have much luck with another Healey neighbor who did not offer his name.

"If you were with Fox News I'd let you up there to get a picture," the neighbor said. "You found the one Republican on the street."

Despite Vermont's reputation as perhaps the most liberal state in the U.S., Romney may be on the verge of winning over at least one of Healey's neighbors.

A self-described undecided voter, Bob French said he may make up his mind as the election draws closer.

"Check back in a month," French said.

Romney's debate prep is the talk of the nearby town of Woodstock. Residents have periodically stopped reporters to ask about the GOP nominee's movements.

The Republican candidate's selection of this woodsy New England backdrop did make the front page of the "Valley News,' but not "top of the fold." That honor went to a story with the headline: "Wild Boar Strolls Into Downtown Lebanon, Snacks on Apples."