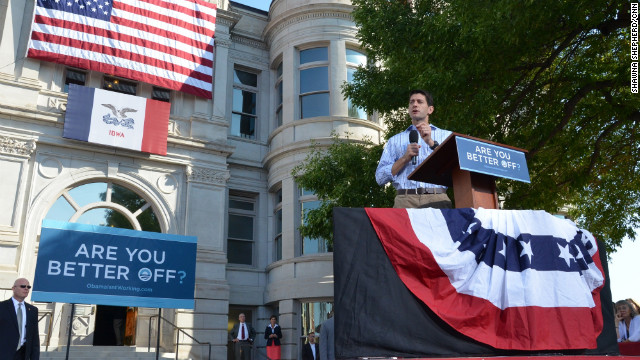 Adel, Iowa (CNN) – Rep. Paul Ryan suggested Bill Clinton was a better president than Barack Obama at a rally in Iowa Wednesday, the same day the former president is to deliver the keynote address at the Democratic National Convention.

The Republican vice presidential nominee continued to make the case Wednesday that Americans are not better off than they were four years ago or when Clinton held office prior to the economic recession.

"We are going to hear from President Clinton tonight in Charlotte. My guess is we will get a great rendition of how good things were in the 1990s but we're not going to hear much about how things have been in the last four years," Ryan said.

Ryan made the claim that unlike Obama, Clinton worked with Republicans in Congress, including the Wisconsin lawmaker who has served in the House of Representatives since 1998.

"President Clinton worked with Republicans in Congress to have a budget agreement, to cut spending. President Obama - a gusher of new spending and only demagoguery from those of us who have offered solutions," he said.

The vice presidential hopeful acknowledged that Obama did "inherit a tough situation" when he came into office but Ryan has said his policies have only made the situation worse.

"President Obama came in with a very tough jobs crisis, one we still have, and he muscled through with one party control. His answer, a $1 trillion borrowing binge, which was a huge government spending spree that they called the stimulus," he said. "And then he quickly turned to and focused all of his attention and his effort and his energies on a partisan government takeover of our health care system."

Ryan also borrowed a line of attack from running mate Mitt Romney when he accused Obama of rolling back welfare reform, one of Clinton's signature bipartisan achievements. Republicans have pushed the claim that Obama waived the work requirement for welfare but independent fact checkers have said it is false.

The rally in Adel was Ryan's third event in the Hawkeye State since he joined the Republican ticket nearly a month ago. Adel is part of Dallas County that GOP presidential nominee Sen. John McCain won in 2008. Tuesday's rally in Cedar Rapids is part of Linn County that Obama won in 2008 with 60% of the vote.

Iowa, the state that launched Obama in early 2008 and helped him win a decisive victory on Election Day, is now up for grabs and both campaigns are fiercely competing for the six electoral votes.

The neighboring Wisconsin-native made his Midwestern appeal to the people standing outside the Dallas County Courthouse.

"I feel like I just parachuted into my own home," said Ryan. "I mean you drive five miles that way it looks like five miles from my house."