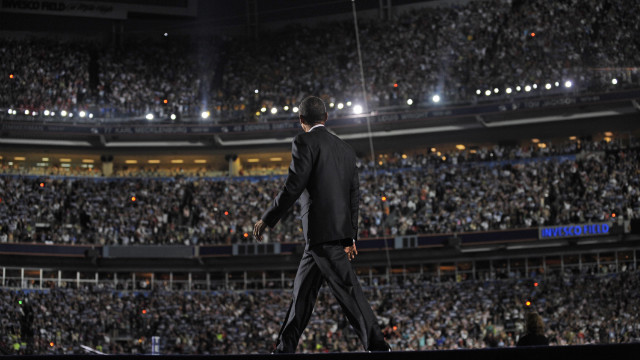 BREAKING: U.S. STOCKS SURGE AHEAD OF FRIDAY JOBS REPORT… All three major indexes closed at the highest levels in years, as optimistic investors went on a buying spree. A combination of stronger-than-expected data on the job market and the European Central Bank's bond-buying program provided the momentum. The Dow Jones industrial average closed more than 240 points higher. – Hibah Yousuf

TRAIL TRIVIA
(Answer below)
A convention bounce is the amount of support a candidate gains in the polls immediately after their party convention. In 2008, neither Barack Obama nor John McCain received a convention bump. What former president received the biggest bump after his party’s national convention?

Tonight, we make the final turn into the general election as the curtain drops on two weeks of political conventions and President Obama gets the chance to make his argument for four more years.

With millions and millions of people watching, Obama will need to deliver and surpass the very high bar set Wednesday evening by Bill Clinton. The latest CNN/ORC poll of likely voters shows the race between Barack Obama and Mitt Romney tied up: 48% to 48%.

We are now in a sprint – 61 days until Election Day.

A senior Obama campaign official structured the three-day convention in the three stages.

“We’ve talked about the heart, the head, and tonight it’s about the future,” said the official, who spoke on the condition of anonymity. “What the president will lay out is a path forward. We want to continue rebuilding this economy in a way that’s meant to last.

“When people leave here, or turn off the television, they’ll have a good idea of what a second term Obama presidency would mean for them.”

The Obama official also noted that the president will contrast his candidacy with that of his rival, Mitt Romney and emphasized that this will not be a laundry list of ideas.

So, while we will be waiting to hear the president, we will also be watching several others who will take the stage this evening. Vice President Joe Biden will “bear character witness to a lot of things that have happened over the past four years. … You’ll hear about the president’s character, his values, his decision-making.” Also, we will be watching to see what former Florida Gov. Charlie Crist says as well as speeches by the 2004 presidential nominee John Kerry and Montana Gov. Brian Schweitzer.

And then there will be the moment. The moment that former Rep. Gabby Giffords, the Arizona Democrat who survived a shooting in January 2011, takes the stage to deliver the pledge of allegiance.

Convention organizers have had to collapse a football stadium type of event into a basketball arena, because of concern about dangerous weather. Earlier today, the president spoke to the 65,000 people who were supposed to attend the final evening of the convention, but are now unable to do so because of the venue change.

“The problem was a safety issue,” Obama said. “I could not ask you, our volunteers, our law enforcement, first responders to subject themselves to the risk of severe thunderstorms. You guys can imagine with all the (security checks) that goes on, the security issues involved, getting 70,000 people into a place is tough, getting them out of there is even tougher. And if we had started seeing severe thunderstorms and lightning in particular it would have been a problem.”

So, in a few hours, we make that final turn that will lead into general election. Did we mention that there are only 61 days until Election Day? And early voting begins in Iowa in exactly three weeks.

Social Watch: On Facebook, Clinton's speech more popular than NFL kickoff game… President Clinton took the ball and ran with it last night, and Facebook has the numbers to prove it. Even though the Dallas Cowboys beat the New York Giants in last night's NFL season opener, it was the former president who garnered the most attention on Facebook. According to data provided to CNN from Facebook, Bill Clinton got more mentions on the site than the terms "Cowboys," "Giants," "football," and "Romo," the Cowboy's starting quarterback. – Eric Weisbrod

FOR YOUR VIEWING PLEASURE: Best Photos of the DNC

Leading CNNPolitics: Obama must make case against change
Four years later, consider the role reversal: As he closes his convention, Barack Obama's greatest challenge is to make the case against change. Yet he can't ask the American people to simply stay the course. The challenge, both daunting and delicate, is to make the case that his first-term policies were correct but that the second-term results will be dramatically different. – John King

Leading Drudge: Priorities: Football Dominates Clinton In Tv Ratings
NBC was the No. 1 network with adults 18-49, and total viewers. On NBC, NFL Kickoff scored a 5.5 adults 18-49 rating, down 14% from a 6.4 fast national for last year's telecast on Thursday, September 8. – Sara Bibel on TV by the Numbers

Leading HuffPo: Obama On 'You Didn't Build That': 'Obviously I Have Regrets For My Syntax'
President Barack Obama told a local Virginia television station Wednesday that he had "regrets" for an ill-phrased remark attacked by Republicans - "You didn't build that" - but he stands by his larger point about infrastructure investment being necessary for businesses to succeed. "Obviously I have regrets for my syntax," Obama said. "But not for the point, because everyone who was there watching knows exactly what I was saying." – Luke Johnson

Leading Politico: Verdict is in: Obama levels more personal attacks
A crabby, negative campaign that has been more about misleading and marginal controversies than the major challenges facing the country? Barack Obama and Mitt Romney can both claim parenthood of this ugly child. But there is a particular category of the 2012 race to the low road in which the two sides are not competing on equal terms: Obama and his top campaign aides have engaged far more frequently in character attacks and personal insults than the Romney campaign. – John F. Harris and Alexander Burns

Leading The New York Times: What to Watch for in Obama’s Speech
President Obama takes the stage tonight competing against a formidable array of convention speakers: Mitt Romney, Michelle Obama, Bill Clinton — and Barack Obama. Not easy. Still, one thing Mr. Obama has proved over the years is that he can deliver the big speech, particularly when he might be backed into a corner. And Mr. Obama has big advantage here: He is going last. – Adam Nagourney

- The Democrats tout their bump, set, spike -
SEN. DICK DURBIN OF ILLINOIS IN AN INTERVIEW ON CNN’s “STARTING POINT”: “There will be a lot of love in that arena for the president tonight. Michelle set it up. Bill Clinton explained it. This president is going to deliver it.”

- First Muslim House member, a Democrat, commends America for nominating Mormon for president -
REP. KEITH ELLISON OF MICHIGAN AT AN AMERICAN MUSLIM DEMOCRATIC CAUCUS EVENT IN CHARLOTTE: “I hope you will join me in saying God bless America for allowing us to practice our faith as other Americans practice theirs. and I thank you for remembering and knowing that there was a time in this country where anti-Semitism against Jewish people was virulent and ugly – far worse than it is today. But Americans overcame that discrimination. And persecution of Mormons was ugly and now the Republicans have nominated a Mormon to represent their party. We are not voting for him but we are proud we are proud that America would do that.”

- Schumer says he brought Jerusalem issue to WH attention -
SEN. CHUCK SCHUMER OF NEW YORK IN AN INTERVIEW ON CNN’s “STARTING POINT”: “Look, on the Jerusalem issue, which I have had some involvement in and did yesterday, it has always been the position of the Democratic Party, of the Democrats overwhelmingly, that Jerusalem is the capital of Israel. Why it wasn't in the platform, who knows, but when I brought it to the White House's attention and others, the president himself intervened and said put it in.”

Ahhh, the coveted convention bounce. Every candidate wants one, very few have recently been so lucky.

According to CNN’s Polling Director Keating Holland, a convention bounce is, “the amount of support a candidate gains in the polls immediately after his party’s convention.” And though it is desired, “it doesn’t always last, and it can easily be confused with gains that the candidate makes for reasons that are completely unrelated to the convention,” says Holland.

George W. Bush in 2004 and Barack Obama in 2008 got bounces within the polls sampling error after their respective conventions. John McCain got no bounce in 2008 and John Kerry actually lost support after his convention in 2004.