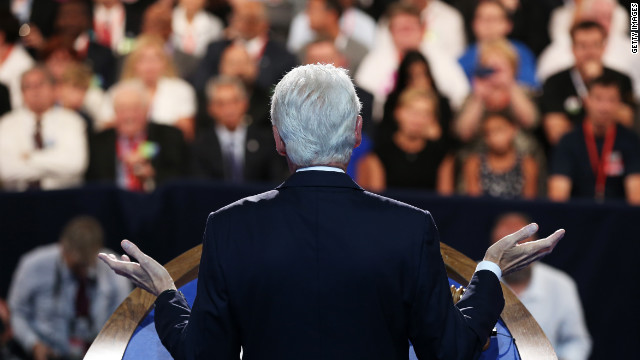 BREAKING: NEW WOODWARD BOOK STARTS TO LEAK OUT… “The Price of Politics,” Woodward’s 17th book, chronicles President Obama’s contentious and still unresolved fiscal policy battle with congressional Republicans that dominated the White House agenda for nearly all of 2011. (On Sunday, The Washington Post will publish an adaptation in its print, mobile and Web editions. The book is scheduled for release on Tuesday. Woodward is a Post associate editor.) … The timing of the book’s publication, with just two months left before Election Day, may pose more of a challenge for Obama than Mitt Romney, the Republican nominee. The president and his White House team occupy center stage in Woodward’s account, along with Boehner, while Romney has no role in the events covered by the book. – Steve Luxenberg

FACT CHECKING THE DNC:
The $2,000 question… "He wants to give tax cuts to millionaires and billionaires," said Elizabeth Warren, a former Harvard law professor who served as the Senate watchdog over the 2008 bank bailout. "But for middle-class families who are hanging on by their fingernails? His plans will hammer them with a new tax hike of up to $2,000." … The $2000 "tax hike" figure that Warren cites is grounded in a third-party analysis that Romney has criticized, but one the authors stand by. The authors also note that their calculations are not precise because they lack some specifics of Romney's plan.

Fact of Fiction: Clinton’s Glory Days… “Listen to me now. No president, no president, not me, not any of my predecessors, no one could have fully repaired all the damage that he (President Obama) found in just four years.” … Like President Obama, President Clinton came into office with soaring joblessness… but under President Clinton, the rate steadily dropped down to the five percent range at the end of his first term… It is really clear when you look at those numbers, very different economic performance from these two administration and they are at pains now to explain this and try to make that context work for them and not against them. – Tom Foreman

Until about 10 p.m. ET last night, we thought we were still in Tampa, Florida. The second day of the Democratic National Convention felt eerily similar to the first two days of the Republican National Convention a week earlier. It was chock-full of red meat remarks, but it lacked the punch to electrify the audience. Contrary to day one of the convention, it seemed as if the audience was tired.

Then Bill Clinton walked onto the stage.

President Clinton to the rescue, again. He delivered, arguably, one of the most important speeches for President Obama’s re-election. If Obama wins a second term, he will have to thank his former political foe, who still has street cred with the Democratic base and blue-collar voters in the battleground states.

Clinton effectively answered the one question that no other Democrat has been able to answer in the past week: Are you better off now than you were four years ago?

“Are we where we want to be? No,” Clinton said. “Is the President satisfied? No. Are we better off than we were when he took office, with an economy in free fall, losing 750,000 jobs a month? The answer is yes.”

Much has been made about the rift that exists between the two men, which got very ugly and very public in the 2008 Democratic presidential primary. While we will never really know the tangled and complex relationship of these two men, Clinton went to great lengths Wednesday night to argue that Obama deserves another four years.

“My fellow Americans, you have to decide what kind of country you want to live in,” Clinton said toward the end of his nearly 50 minute speech. “If you want a ‘you’re on your own, winner take all’ society, you should support the Republican ticket. If you want a country of shared opportunities and shared responsibilities – a ‘we’re all in it together’ society, you should vote for Barack Obama and Joe Biden.”

Whether you agree with Clinton’s argument or not, he delivered for Obama last night.

As we head into the final day of the Democratic convention, here are the five things we are thinking about this morning:

1.) The Clinton factor. Bill Clinton owned Charlotte last night, but will he today as well? A good friend of ours – a well respected Republican strategist – said that if Obama wins, it is because of Clinton. But, he added, "the Democratic Party is no longer Obama’s party, it is Clinton’s." Is that true?

2.) What about Biden? Vice President Joe Biden has been here in Charlotte, but has assumed a relatively low profile. Tonight, we get to hear Biden speak, and we wonder what he will say. Will Biden focus his attack on Romney or Romney and Ryan? We have been writing a lot the past few weeks about how these speeches are critically important to the younger generation: Florida Sen. Marco Rubio, San Antonio Mayor Julian Castro and Georgetown law graduate Sandra Fluke. But if Biden is seriously considering running in 2016, then tonight’s speech will be equally as important.

3.) What will be the mood? President Clinton breathed life into a convention that might have been electrified one day too early. There is no question that the delegates will be jumping out of their seats when Obama formally accepts the nomination. But will the smaller venue dampen the president's delivery? Will the convention ignite like it did on Tuesday night when first lady Michelle Obama spoke, or will it suffer from the comparison?

4.) The expectations game. How much will the Obama campaign downplay any discussion of a convention bounce? Already, a senior Obama campaign official told us that since the conventions are so much later in the year, there’s less opportunity for those big bumps. Still, in a race that remains in the margin of error, there is no question they are looking for that bump that Romney did not get.

5.) Fluke delivered. The young woman cast into the national spotlight because of her war of words with Rush Limbaugh delivered. We previously wondered if she would seize the moment. While her speech was not a barn-burner – it had several effective political lines such as this one: “Our president, when he hears a young woman has been verbally attacked, thinks of his daughters — not his delegates or donors — and stands with all women. And strangers come together, reach out and lift her up. And then, instead of trying to silence her, you invite me here, and give me a microphone to amplify our voice. That's the difference.” We wonder if this line – and this recent law school graduate who delivered it - will show up on the campaign trail soon in her own regard.

Leading CNNPolitics: The grades are in: Obama's first-term report card
An energized electorate inspired by a groundbreaking election and expectations as high as Mount Everest had grown accustomed to greeting him with spontaneous chants of "yes we can." … This high bar assured there would be a very long to-do-list, and some Republicans were quick to publicly admit they would not make his job easy. – Dan Lothian

Leading Drudge: They Booed Putting God Back!
Needled by Mitt Romney and other Republicans, Democrats hurriedly rewrote their convention platform Wednesday to add a mention of God and declare Jerusalem the capital of Israel after President Barack Obama intervened to order the changes. – Josh Lederman and Julie Pace on Yahoo News

Leading HuffPo: Bill Clinton Speech Asks Undecided Voters To Hang On, Give Obama Another Chance
Bill Clinton made the nation a big promise Wednesday night, pledging to those still struggling that their economic fortunes will turn around if they reelect President Barack Obama. “A lot of Americans are still angry and frustrated about this economy," Clinton told a spellbound audience of delegates at Time Warner Cable Arena. "If you look at the numbers, you know that employment is growing, banks are beginning to lend again, and a lot of housing prices are even beginning to pick up. – Ryan Grim and Jon Ward

Leading Politico: The not-so-great communicator
Barack Obama’s light Christmas reading back in 2010 was Lou Cannon’s biography of Ronald Reagan — 920 pages on the political storyteller Obama admired most, to the profound annoyance of his Maddow-loving base. Obama’s aides can’t quite remember whether the boss ever finished it. Even if he did, no one would ever mistake Obama — an electrifying speaker with the rare capacity, at times, to spin emotion and intellect into rhetorical gold — for the Great Communicator. – Glenn Thrush

Leading The New York Times: 4 Years Later, Scarred but Still Confident
He warned them in 2008, and when he formally opened his re-election campaign in May, he put it in his speech again. He will “never be a perfect president,” he said, a line he now repeats at stop after stop. … If Denver was all about promise, Charlotte is all about patience… “Do you ever rethink this, about whether it was worth doing?” Mr. Axelrod remembered asking. Mr. Obama looked at him incredulously. “Of course not,” he said. “If you’re in public life, where else would you rather be?” – Peter Baker

Leading Atlanta Journal Constitution: In a convention big on mayors, Reed has small role
What do the cities of Boston, Charlotte, Chicago, Los Angeles, Minneapolis, Newark, N.J., Philadelphia and San Antonio have that Atlanta doesn’t? A mayor with a speaking role at the 2012 Democratic National Convention. While Atlanta Mayor Kasim Reed has participated in a pair of media round-table events, he has not participated in any public events sponsored by either the Democratic National Committee or President Barack Obama’s campaign. – Aaron Gould Sheinin

A convention bounce is the amount of support a candidate gains in the polls immediately after their party convention. In 2008, neither Barack Obama nor John McCain received a convention bump. What former president received the biggest bump after his party’s national convention?