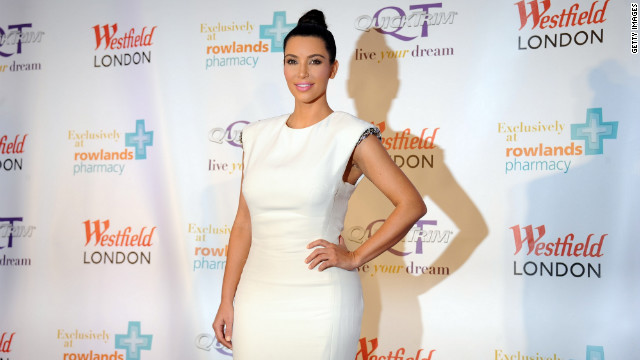 The venue she lists, Club Hush, doesn't appear on the official convention website, and the phone number listed in the yellow pages for the club is disconnected.

President Barack Obama officially accepts the Democratic nomination for president Thursday at the Time Warner Cable Arena, and while a multitude of political stars will be present, it wasn't clear whether Kardashian would be in attendance for the main event of the three-day convention.

On Wednesday CNN reported that a trio of young actresses – Scarlett Johansson, Natalie Portman and Kerry Washington – would make some kind of appearance at the Democratic event.

Kardashian is a regular guest at the White House Correspondents Dinner, held annually in Washington, though she's been the butt of several jokes at the gathering.

"Seriously, guys, what am I doing here?" Obama said in a pre-taped segment at this year's dinner.

"Why am I telling knock-knock jokes to Kim Kardashian? What is she famous for, anyway?" he asked.

Kardashian later told US Magazine that the highlight of that night was meeting Martha Stewart.

Last October, the entire Kardashian family was reportedly offended when first lady Michelle Obama criticized their bevy of reality shows, telling iVillage ""Barack really thinks some of the Kardashians - when they watch that stuff - he doesn't like that as much."

The family was "completely blindsided," according to TMZ, since the president apparently told Khloe Kardashian that the flagship Kardashian reality show, "Keeping Up with the Karshashians," was "great" when the two met last year.