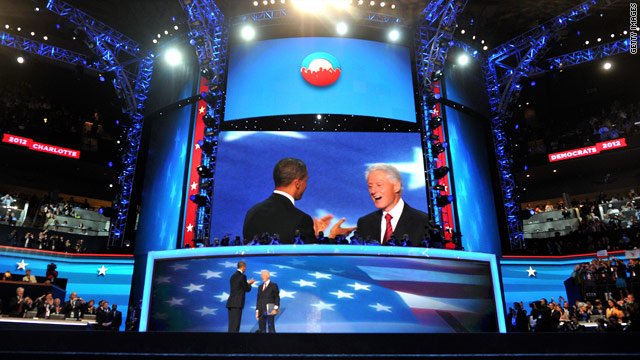 Charlotte, North Carolina (CNN) - President Barack Obama will make his pitch Thursday in the final night of the Democratic National Convention, where he'll aim to lay out what voters can expect under a second term.

While first lady Michele Obama and former President Bill Clinton headlined the other two nights this week, the president's re-election team said Obama will cap the week with a final theme of looking "forward."

"So we've talked about the heart, the head, and tonight it's about the future," a senior campaign official told CNN reporters covering the convention in Charlotte, North Carolina.

Officials said the president will reiterate "concrete, tangible" policy ideas in his speech, though it was unclear whether he would put forward specific benchmarks and how to pay for those goals. One official, however, stressed the speech would not be a laundry list of proposals.

"This is not a State of the Union address," the official said. "It's a path forward."

The president will draw contrasts with his Republican challenger Mitt Romney, but the campaign argued the speech will also be "bigger than that."

"We're not speaking to necessarily the delegates in the room, we're speaking to the American people," the official added.

Drama erupted at the convention Wednesday when convention officials held a vote to re-insert language into the party platform recognizing Jerusalem as the capital of Israel and including the word "God" in the document–two omissions that drew criticism from many in the party. The campaign said the president personally directed that it be fixed.

Asked if Obama will address the changes in the speech or give a final word on the issue, a campaign official argued there was no need to further talk about it.

"We don't think there is any lack of clarity or need to put it to bed; we put it to bed yesterday," the official said.

Vice President Joe Biden will open up for the president, taking the stage in the 9 p.m. ET hour, shortly before Obama. He's expected to serve as a "character witness" and speak "personally about what it means to be in partnership" with the president, according to the campaign.

CNN reported earlier Thursday that former Rep. Gabby Giffords, who resigned her seat in January a year after receiving a gunshot to the head, will lead the pledge of allegiance when the evening program convenes at 4:30 p.m. ET. A campaign official said the decision was made based on the president's friendship with Giffords but did not say whether it was his idea to involve her.

Also on the docket is 2004 Democratic presidential nominee John Kerry. The Massachusetts senator will be part of a section on national security. Caroline Kennedy and former Michigan Gov. Jennifer Granholm will speak, as well.

While Thursday's events were originally scheduled to take place in the Bank of America stadium, convention organizers decided Wednesday to move the final night indoors and back into the Time Warner Cable arena, the site of the previous two nights.

The move means that tens of thousands of ticket holders for the stadium speech will be turned away, as the arena seats 44,000 fewer people than the stadium. Obama hosted a call Thursday afternoon with the dis-invited guests, and about a watch party at the convention center located nearby the arena.

As a result, some performances were cut from the schedule, including Earth, Wind and Fire, the campaign said. Foo Fighters and Mary J. Blige are still scheduled to go on.