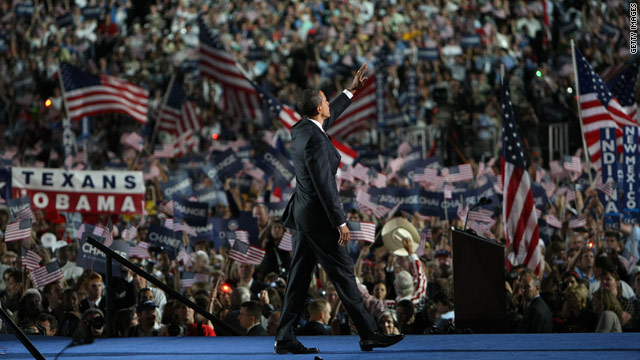 (CNN) - President Barack Obama told supporters on Thursday he regretted that some 65,000 of them would be unable to watch his acceptance speech at the Democratic National Convention that evening, and urged them to continue to stay engaged in his reelection effort.

"I want to begin by saying how much I regret that we're not all gathering together in one place to deliver my acceptance speech tonight," Obama told supporters on a conference call which the campaign organized after weather canceled plans for Obama to accept his party's nomination at the Bank of America Stadium in Charlotte, North Carolina.

Instead, Obama will deliver his remarks at the Time Warner Cable Arena, which has housed the other major convention events. The call was announced Wednesday morning as thunderstorms and heavy rain loomed in Thursday's forecast. Convention organizers said they had distributed some 65,000 tickets for Thursday evening's events, which was to include speeches by Obama, Vice President Joe Biden, and live music.

Those with the so called "community credentials" will not be able to attend the convention in person due to space concerns, although delegates and other guests will be allowed in. On Wednesday evening, as both he and former President Bill Clinton were in the hall, security officials for the event closed the hall saying it had reached capacity.

On the conference call, Obama acknowledged that the move was "disappointing" and spoke about the safety concerns which organizers said prompted the location change.

"I could not ask you, our volunteers, law enforcement, first responders, to subject themselves to the risk of severe thunderstorms," Obama said, adding that "getting 70,000 people into a place is tough, getting them out of there is even tougher, and if we had started seeing severe thunderstorms and lightning in particular it would have been a problem and we would have had a situation where we were putting you guys at risk."

Obama acknowledged that many supporters who were given "community credentials" to the event were volunteers who had been given the tickets in exchange for volunteering with his campaign, "I know they've been working nonstop for months."

He said the campaign would "do everything we can to get you into events taking place near you, and our staffs are going to be in touch with you about that so hopefully you'll have an even closer front row seat to the campaign, which won't be hard to do since you're part of the campaign."

The president gave few clues as to what would be in his acceptance speech, except to say that he was "looking forward to laying out what are the stakes in this election, what my vision for the future is," He also said that his campaign has "offered a clear contrast to what people saw in Tampa," where Republicans held their convention last week.

He praised the earlier speeches of his wife, first lady Michelle Obama, and Clinton, whom he said "broke down the issues as effectively as anybody could."

In 2008, Obama also held the final day of his convention in a larger venue, the Invesco Field stadium in Denver, Colorado, and his campaign told reporters on Wednesday that they saw inviting thousands of supporters to see the president's speech in person as a grassroots organizing tool.