Charlotte, North Carolina (CNN) - President Barack Obama said he will share his vision for the future Thursday night at the Democratic National Convention that nominated him for re-election following a forceful political endorsement from former President Bill Clinton.

Obama's speech concluding the three-day convention originally was set for the 73,000-seat Bank of America Stadium, but possible thunderstorms caused organizers to move it indoors to the smaller Time Warner Cable Arena, where the political conclave has taken place so far. 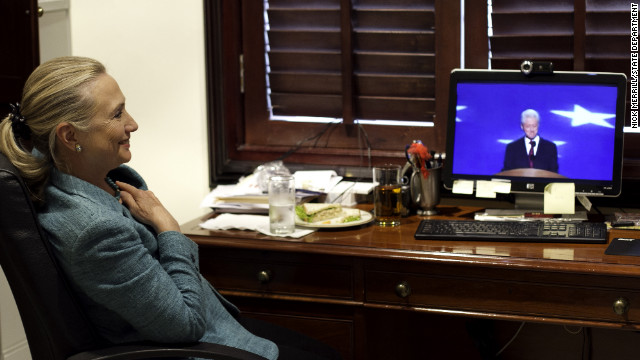 Hillary Clinton didn't watch the speech live because she was busy meeting with leaders of the tiny nation of East Timor, 9,963 miles from Charlotte, North Carolina. According to reporters traveling with the secretary of state, Clinton watched a taped version around midnight eastern time.
END_OF_DOCUMENT_TOKEN_TO_BE_REPLACED

On the Trail: Thursday, September 6

See the full schedule after the jump.
END_OF_DOCUMENT_TOKEN_TO_BE_REPLACED

Five things we learned from Day Two of the DNC

(CNN) - While we learned that rising stars in the Democratic Party come in younger (Sandra Fluke) and older (Elizabeth Warren) versions, it was a party elder and established superstar (President Bill Clinton) who stole the show on Day Two of the Democratic convention.

Wednesday's session began amid controversy over language in the party's platform that saw a tumultuous voice vote. And another one. And another one. It's not the image Democrats wanted to project after a successful opening night.

CNN: Clinton’s remarks at the DNC
In his remarks at the Democratic National Convention on Wednesday, former President Bill Clinton offered a spirited defense of President Barack Obama and officially entered his name into nomination for reelection. "In Tampa, the Republican argument against the President's re-election was pretty simple: we left him a total mess, he hasn't cleaned it up fast enough, so fire him and put us back in," Clinton said.

CNN: Romney campaign responds to Clinton DNC speech
GOP presidential candidate Mitt Romney's campaign issued a statement after former President Bill Clinton's address to the Democratic National Convention on Tuesday night, saying Clinton "drew a stark contrast between himself and President Obama." "Bill Clinton worked with Republicans, balanced the budget, and after four years he could say you were better off," Romney campaign spokesman Ryan Williams wrote. "Barack Obama hasn’t worked across the aisle – he’s barely worked with other Democrats – and has the worst economic record of any president in modern history.

END_OF_DOCUMENT_TOKEN_TO_BE_REPLACED

The grades are in: Obama's first-term report card

Washington (CNN) - An energized electorate inspired by a groundbreaking election and expectations as high as Mount Everest had grown accustomed to greeting him with spontaneous chants of "yes we can."

He promised to take "bold, swift action" on the ailing economy and break the partisan grip on Washington by ending what he called "petty grievances and false promises." 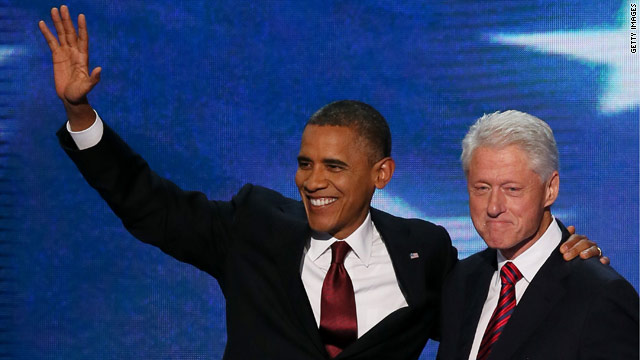