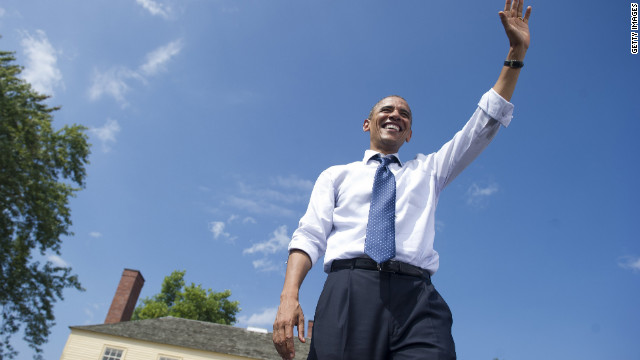 BREAKING: WHILE CLINTON TOPS OBAMA IN SPEECH REVIEWS, OBAMA BEATS HIM IN THE RATINGS... While we wait for official Nielsen numbers, the preliminary ratings data shows that cumulatively, across broadcast and cable news networks, 29 million television viewers watched President Obama's speech last night from 10 p.m. to 11:15 p.m. (CNN beat out ABC, and CBS, as well as all cable networks, thanks to your loyal viewership). On Wednesday night, up against fierce competition from the NFL, former president Bill Clinton's speech attracted an estimated 25 million viewers vs. an average 23.9 million viewers for the key football game.

OBAMA EKES OUT A WIN ON FACEBOOK AS WELL... Politics beat out pop culture Thursday night on Facebook. President Barack Obama was mentioned more times overall than MTV’s Video Music Awards show, which aired the same evening as the final night of the Democratic National Convention.

According to Facebook’s Talk Meter, which measures the amount of buzz a person or event gets on Facebook, Obama’s Thursday night speech edged out former President Bill Clinton’s Wednesday night address, while both speeches ranked higher than their competitors in primetime – the MTV’s Video Music Awards on Thursday and the National Football League’s season opener on Wednesday. Even though Obama won overall buzz, Clinton garnered more buzz from user about the age of 45. – Eric Weisbrod

11:44 a.m. ET: Mitt Romney at a media availability in Iowa: “After the party last night, the hangover today. The jobs numbers were very disappointing. For almost every net new job created, approximately four people dropped out of the workforce. Seeing that kind of report is obviously disheartening to the American people who need work and are having a hard time finding work.”

1:04 p.m. ET: President Barack Obama at a campaign event in New Hampshire: “Today, we learned that after losing 800,000 jobs a month when I took office, business once again added jobs for the 30th month in a row for a total of 4.6 million jobs. But that's not good enough. We know it is not good enough. We need to create more jobs faster. We need to fill the hole left by the recession faster, and we need to come out of the crisis stronger.”

TRAIL TRIVIA
(Answer below)
This year’s Democratic National Convention was three days long – as was the Republican National. What was the longest Democratic convention in history?

We love what we do. Covering politics is our calling, but also a thrill, as we live to kick the tires of the men and women who want to lead this amazing country we call home.

Nowhere is this combined passion and patriotism more celebrated than the quadrennial political conventions. Now with 16 conventions between us, we were struck by two things that made this cycle distinct: 1) the contrast between the two parties' conventions was starker than ever. And 2) the pace of the news cycle and the campaign has made the coverage and the message harder to keep up with.

First, we wish all Americans could attend both conventions, as there are so many differences between the organization and surrounding events that help inform an inquisitive mind. Sure, they both have things in common, and scouting out the future talent is one of the most rewarding parts of the whole week.

This year, as the quadrennial question of "will they get a bounce" becomes the topic du jour, we were struck by how much the cycle of the political year has changed. "It used to be that Labor Day was the traditional kick-off of the campaign," a senior Obama campaign official told us. "This year, we're in the fourth quarter."

It is true, that the pace, as in all facets of our life, has accelerated. For journalists, the deadlines were relentless with all platforms demanding publication and insights – from short, pithy tweets to long essays designed to break through the noise.
Even so, it is our journalistic pleasure to once again smack down the notion that conventions are somehow passé. As the veteran journalist Al Hunt said at his surprise party this week, "I love politicians. I think public service is a noble calling ... and if neurosurgeons and dentists can have conventions every year, why can't politicians every four?"

So, as we leave you to head to the airport, we want to salute the staffers behind those politicians who have found a way to keep up with the pace of modern campaigning in a way that has magnified their influence.

Once again, we partnered with Klout to rank the top five Democratic strategists according to Klout's scale of 100. And once again, we removed CNN contributors even though some of them, including Donna Brazile, Paul Begala and Hilary Rosen deserve a shout-out for their use of social media to get their message across.

Leading CNNPolitics: Post-convention campaigns get under way
Now it begins. All over again. The primary season over and the nominating conventions complete, Mitt Romney and Barack Obama hit the ground running Friday for the final stretch of a campaign that began, for Romney at least, more than a year ago in Iowa. Over the next 60 days of campaigning, much of it focusing on key battleground states, the two men will pitch their visions for the country to a divided electorate. – Michael Pearson

Leading Drudge: 8.1%, +96,000, Fed Set To Pump, 368,000 Dropped Out, 88,921,000 'Not In Labor Force'
Jobs growth slowed sharply in August, setting the stage for the Federal Reserve to pump additional money into the sluggish economy next week and dealing a blow to President Barack Obama as he seeks re-election. Nonfarm payrolls increased only 96,000 last month, the Labor Department said on Friday. – Lucia Mutikani

Leading HuffPo: Simpson-Bowles References In Obama, Biden DNC Speeches Vex Media, Progressives
Journalists here are homing in on Vice President Joe Biden's criticism of the GOP for not supporting any of the deficit-reduction proposals over the past year, noting that President Barack Obama did not embrace a report put out by the co-chairs of the Simpson-Bowles panel. ABC's Jake Tapper, for instance, called the following, from Biden, an "incredible line." – Ryan Grim

Leading Politico: Two conventions tell the tale of 2012
Republicans last week in Tampa and Democrats this week in Charlotte were not faking it. Partisans on both sides really do regard the other party’s nominee with contempt, and both sides look at the other’s agenda with genuine incomprehension. – John F. Harris and Jim Vandehei

Leading The New York Times: Joblessness May Undermine Obama Convention Bump
Presidential candidates can usually count on luxuriating in a few days of warm feelings from their convention as they ride the high generated by impassioned supporters and cross their fingers for rising poll numbers. – Jim Rutenberg

- You don’t know me -
SARAH PALIN IN AN INTERVIEW ON FOX BUSINESS NETWORK: "I think he diminished himself by even mentioning my name. How does he even know my name? I mean, aren't these guys supposed to be these big wig elites who don't waste their time on little people like me representing the average American."

- Dem says the ‘convention seemed more emotional’ -
BEAU BIDEN, JOE BIDEN’S SON AND THE ATTORNEY GENERAL OF DELAWARE, IN AN INTERVIEW WITH “STARTING POINT”: “The whole convention seemed more emotional to me. There was a great energy obviously in 2008. It was a whirlwind for our family. My dad had just gotten a call. My mom rebuilt our family. Everybody up here has gone through something. And we went through something in 1972.”

- Ann talks ‘horse sense’ -
ANN ROMNEY AT A CAMPAIGN EVENT IN VIRGINIA: “I should tell you I feel right at home because I am in a barn. (laughs) So, let’s talk some horse sense. Barack Obama said four years ago if I can’t turn this economy around after three-and-a-half years I am looking at a one term presidency. Well, it is our turn to the economy around and I know Mitt can do it.”

Ginger Gibson (@GingerGibson)
Still no word from Romney himself on job numbers. Why? Because his campaign didn't want him answering on camera.

Ari Shapiro (@Ari_Shapiro)
Thousands of people drove long distances to this Romney rally in NW Iowa. But many came from nearby South Dakota. #NotASwingState

McKay Coppins (@mckaycoppins)
Vibe in high school gym where Romney will soon speak is that of a pep rally. Marching bad playing, volunteers throwing t-shirts to the crowd

Davis was in large part a compromise-candidate when no one could agree on whether to nominate Secretary William Gibbs McAdoo and Gov. Al Smith. In the general election, Davis and Bryan were defeated by Republican Calvin Coolidge.

The real historic moment from the 1924 Democratic convention was the unwanted participation of Klu Klux Klan members. In a resurgence of the Klan, the bigoted group gained political power in the Deep South and some mountain states, leading some members to become Democratic delegates.

When Gov. Smith was nominated - a Roman Catholic - the Klan grew incensed. During the convention, the Klan organized a protest in New Jersey that featured thousands of hooded Klansmen. The protest led some to become “fearful of Klan and Anti-Klan” clashes in Madison Square Garden.