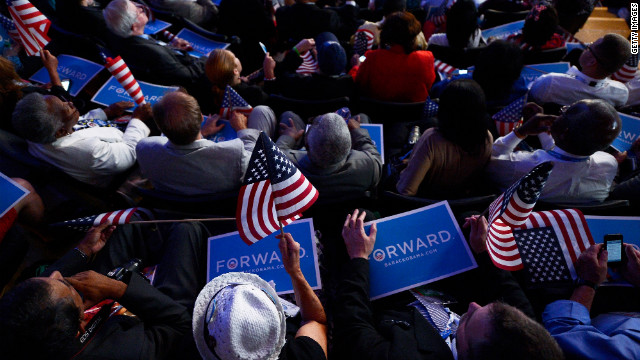 The monthly report, one of the few remaining before voters head to the polls November 6, showed the unemployment rate falling to 8.1% as more workers withdrew from the labor market. The 96,000 jobs created were also not enough to keep up with the population entering the workforce.

Republicans, eager to portray Obama as weak on economic policy and jobs creation, quickly latched onto Friday's report as another indication that his time in office has been a failure, saying Obama's policies were hurting struggling Americans – and that the time had come for a change.

"After the party last night, the hangover's today," Mitt Romney, Obama's Republican challenger, told reporters ahead of a campaign stop in New Hampshire. "The jobs numbers were disappointing, for almost every new job created, approximately four people dropped out of the workforce. Seeing that kind of report is obviously disheartening to American people that need work and are having a hard time finding work."

"There's almost nothing the president has done in the last three and half four years that give the people confidence that the president knows what he's doing when it comes to jobs and the economy," Romney continued. "And there's certainly nothing he said last night that give the American people confidence that he knows what he would do to create jobs or build a stronger economy."

Obama himself told a crowd in New Hampshire the numbers were "not good enough."

"We need to create more jobs faster," Obama said. "We need to fill the hole left by this recession faster. We need to come out of this crisis stronger than when we went in."

Paul Ryan, Romney's running mate, said on CNBC the numbers were "not even close to what a recovery looks like."

"This is not what President Obama promised," Ryan said.

While jobs numbers aren't the only important economic figures, they are the most highly scrutinized. No sitting president facing an unemployment rate higher than 8% has won another term since Franklin D. Roosevelt.

"These numbers really reinforce my sense of where the race stands after both conventions," CNN Senior Political Analyst Ron Brownstein said after Friday's numbers were released. "To me, it felt like neither Mitt Romney nor Barack Obama really demonstrated a second gear that would really expand their coalition beyond what they came in with. And thus the race seems poised for just trench warfare with each side fighting to move very small margins among their various constituencies."

"This is not catastrophic enough to drop the bottom out from President Obama, but no tailwind behind him at all. And just setting us up for grinding trench warfare," he continued.

David Frum, another CNN contributor and a former speechwriter for President George W. Bush, said the numbers meant more people were giving up hope – and that was bad for Obama.

In a statement released by the White House, Alan Krueger, the chairman of Obama's Council of Economic Advisers, wrote that the report did indicate the economy was recovering.

"While there is more work that remains to be done, today's employment report provides further evidence that the U.S. economy is continuing to recover from the worst downturn since the Great Depression," Krueger wrote. "It is critical that we continue the policies that are building an economy that works for the middle class as we dig our way out of the deep hole that was caused by the severe recession that began in December 2007."

As reflected in Democrats' struggles over answering the question "are you better off today than you were four years ago," the president's team must maintain a balance between touting the ways the economy has improved, while still recognizing the dire circumstances facing millions of Americans.

Former President Bill Clinton, speaking to delegates Wednesday, summed up the Democrats' challenge this way: "Many Americans are still angry and frustrated with the economy. Though employment is growing, banks are beginning to lend and even housing prices are picking up a bit, too many people don't feel it."

If Obama is re-elected, Clinton said, "You will feel it."

The president himself made a similar pitch Thursday, saying "change will not happen" if voters turn him away in November.

"The truth is, it will take more than a few years for us to solve challenges that have built up over decades," Obama added.