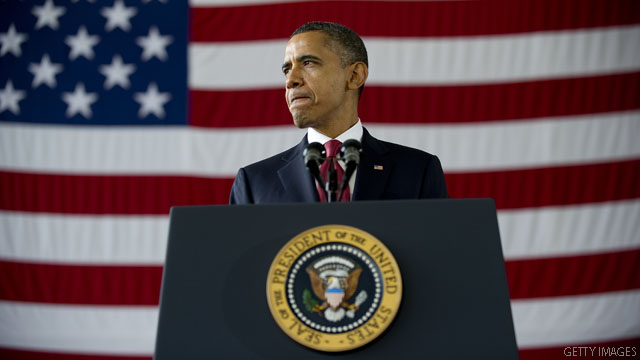 Iowa City, Iowa (CNN) - On the first day of campaigning after his speech to the Democratic National Convention, President Obama attempted to keep the post-convention momentum going with a rally on the campus of the University of Iowa.

He continued to push his economic message of what he calls "two fundamentally different visions" for the middle class.

"I don't believe that another round of tax breaks for millionaires will bring good jobs back to our shores or pay down our deficit," Obama said. "I sure don't think firing teachers or kicking students off of financial aid is somehow going to grow our economy or help us compete with scientists and engineers that are coming out of China."

The president said the new unemployment rate of 8.1% in August was progress but more work needed to be done.

"Today we learned that after losing 800,000 jobs a month when I took office, businesses added jobs for the 30th month in a row. We've added more than 4.6 million jobs," he said.

"But we know that that's not good enough. We can do better. We need to create jobs even faster. We need to fill the hole left by this recession. We need to come out of this crisis stronger than when we went in."

But the unemployment rate in Iowa is 5.3%, the lowest of any battleground state and well below the national average. According to the Obama campaign, more than 9,000 jobs in Iowa were saved by the auto bailout. The auto industry accounts for less than 4% of the state's work force.

President Obama was joined by his wife, Michelle, Vice President Joe Biden, and Jill Biden for the day, which also included an earlier stop in New Hampshire. His stop in Iowa City was his 8th trip to Iowa since the beginning of the year, and his third in the last week and a half.

His Republican challenger, Mitt Romney, was also in both Iowa and New Hampshire on Friday, and hit Obama over his handling of the economy.

"This president tried, but he didn't understand what it takes to make our economy work," Romney said in Orange City, Iowa. "I do. I will use that experience to get Americans to work again."