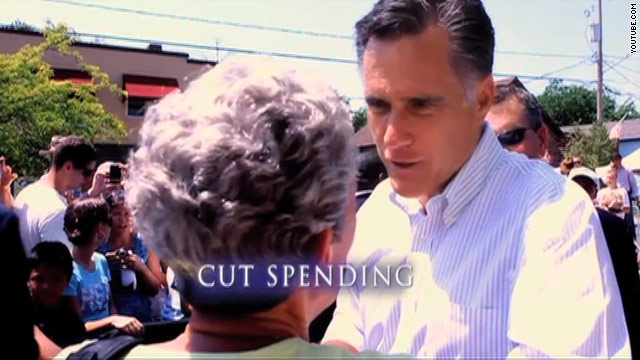 (CNN) - Less than an hour after President Barack Obama had stepped off of the Democratic National Convention stage, Republican challenger Mitt Romney's campaign announced 15 new, state-specific television advertisements which the campaign says will run in 8 battlegrounds.

A week ago, Romney was officially made the Republican Party's presidential nominee, granting him access to a substantial war chest set aside for the general election. His campaign largely stayed off of television during the Democratic National Convention, which concluded after Obama's speech on Thursday.

Asked how much the campaign was spending on the buys, a Romney campaign spokeswoman offered no reply.

But a Democratic ad buying source told CNN the Romney campaign purchased roughly $4.5 million worth of ad time beginning Friday and going through Monday, saying the information was preliminary as of Thursday evening. Team Romney stayed off the air most of this past week while the Democrats held their convention.

Now that Romney has officially been named the GOP nominee his campaign will get its hands on tens of millions of dollars that could only be tapped for the general election part of the campaign.

The spots will air in the eight battleground states of Colorado, Florida, Iowa, Nevada, New Hampshire, North Carolina, Ohio, and Virginia, the campaign said. Each is rated a toss up on the CNN Electoral Map.

Each opens with a clip from Romney's convention address a week ago.

The ads then move to touch on state-specific themes and criticism of Obama.

"Here in North Carolina, we're not better off under President Obama," the narrator says in a spot customized for the state which hosted the Democratic convention.

Each ad ends with a pledge that Romney, if elected president, would create new jobs in the state - a pledge ranging from 59,000 new jobs for New Hampshire upwards to 700,000 new jobs in Florida. A spot tailored for the Buckeye State says Romney would "keep Ohio jobs in Ohio."

The ad titled in part "Defense," which the campaign says will run in Colorado, Florida, North Carolina, Ohio, and Virginia, includes variations on a claim that Obama would cut the federal defense budget. "His defense cuts will weaken national security and threaten nearly 20,000 jobs," one ad, the Colorado spot, said.

Although the ad does not specify what defense budget cuts Obama is behind, Romney has regularly tied Obama to the budget cuts which are a result of the failure of the so-called "supercommittee." A CNN fact check evaluated Romney's remarks at the GOP convention last week, and found "the cuts aren't entirely of Obama's making, and their impact on national security is a subject of some debate." The fact check did find that Obama’s 2013 budget request was down from the peak of military spending, which occurred as wars were being waged in both Iraq and Afghanistan.

Another spot partially entitled "Overregulation" says that under Obama, "excessive government regulations are crushing job creation." Romney's plan would "create over 200,000 new jobs for Colorado" and "over 130,000 new jobs for Iowa," the two states in which it is to run.

Obama's "failed economic and trade policies with China" are the focus of spots which will run in North Carolina and Ohio. The ads claim the president's policies have "destroyed thousands of jobs."

In addition to the defense-themed ad, voters in Virginia will see spots on the topics of energy and home values. "His war on coal, gas, and oil is crushing energy and manufacturing jobs," the narrator charges in the energy spot.

Florida voters will see a spot on housing which says under the president's watch, "home values collapsed, home construction jobs lost, [and] high rate of foreclosure." A Virginia ad hammers Obama for policies which led to "lowering home values, putting families at risk."

Iowa voters will see an ad which says "there's a prairie fire of debt which grows over three billion dollars each day." Romney, the narrator says, would "cut government spending [and] eliminate the deficit."

"Fewer jobs, higher taxes on the middle class, fuel prices have doubled," claims a spot to run in New Hampshire. The ad tailored for Nevada points out it is the state with "the highest unemployment rate in the nation."

Romney spent the majority of this week off the campaign trail, but will travel on Friday to two states in which the new ads will run. He will hold rallies in Orange City, Iowa, and Nashua, New Hampshire, on Friday.