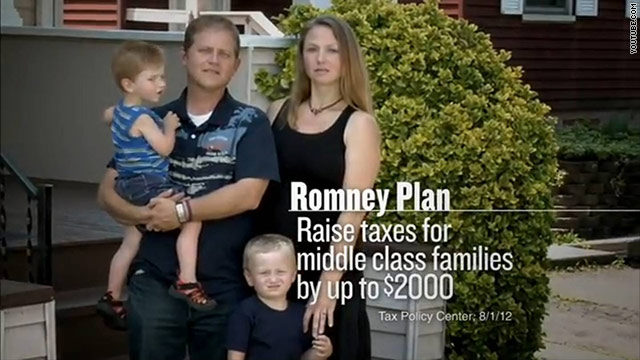 The Priorities USA Action ad titled “We the People” will run next week online and on televisions in six key battleground states – Colorado, Florida, Iowa, Ohio, Virginia and Wisconsin.

The ad will run as a part of a $30 million project aimed at putting a dent in the Romney/Ryan economic plan, casting the pair’s tax proposals as detrimental to the middle class, according to a release about the ad.

The ad hangs its case on a report from the nonpartisan Tax Policy Center released in August that determined Romney's plan would provide large tax cuts to the wealthiest Americans while increasing the tax burden on the lower and middle classes.

The Romney campaign has taken issue with the report, saying it does not take into account the Republican nominee’s full plan, failing to account for additional revenue that would result from a part of Romney’s plan reducing the corporate tax rate.

Romney’s plan also calls for a continuation of the Bush-era tax cuts to today’s income rates and elimination of the alternative minimum tax. While Romney’s tax cuts would lead to a reduction in government revenue, the Republican nominee says the plan makes up the difference by limiting deductions, exemptions and credits currently available to top-level income earners. Romney has not yet provided specifics on which tax breaks he would eliminate.

The narrator in the ad says Romney’s budget plan will hurt the middle class, “Raising taxes on the average family by up to $2,000 while giving a tax break of $250,000 to multimillionaires.”

“Americans do not accept Mitt Romney's vision that says the middle class should bear more of the tax burden so multimillionaires can enjoy another tax cut,” senior Priorities strategist Bill Burton said in a statement about the ad.

The Romney campaign pushed back against the ad, which they call a "misleading attack from a discredited ally of the President."

"The only candidate running who wants to raise taxes is President Obama," said Romney campaign spokesperson Ryan Williams, adding that Obama has run out of economic solutions for the country. "After yet another devastating jobs report, the last thing we need is more of the same failed policies that haven't worked. Mitt Romney wants to lower rates across the board, spur growth and investment, and get our economy back on the right track."

Obama’s own campaign released an ad with a similar message to Priorities' new ad last week, hitting the president’s opponent for his tax proposal and using the Tax Policy Center report as evidence of the damaging effect Romney’s plan will have on the middle class.