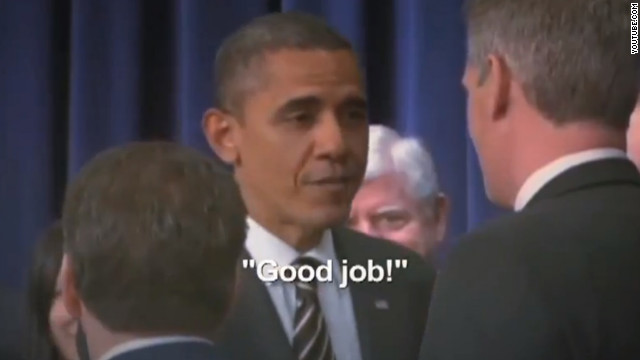 (CNN) - The latest campaign ad released by a Republican senator running for reelection shows him shaking hands with a Democrat most GOP candidates are running against: President Barack Obama.

"Good job," Obama is seen saying in the spot, which was produced by Sen. Scott Brown of Massachusetts.

Brown, who is seeking reelection in Massachusetts, is one of a few Republicans nationwide who has campaigned in part on his independence and willingness to work across the aisle.

In his latest spot, called "Insider Trading," Obama greets Brown after signing into law the Stop Trading on Congressional Knowledge, or STOCK, Act. Brown was behind a Senate version of the law which outlaws insider trading among members of Congress plus their spouses and staff.

"If you did that, you'd go to jail," Brown says to the camera in the ad. Although Obama can be seen on screen, he makes no verbal mention of the president.

Brown's on-camera lines are delivered from the driver's seat of his pickup truck, which became one of his icons in his successful 2010 bid for the seat. He was filling the seat held for years by the late Sen. Ted Kennedy.

Brown's Democratic opponent this year, Elizabeth Warren, was given prominent primetime billing at the Democratic National Convention last week. The Harvard University professor, who was Obama's pick for a consumer advocacy board, spoke shortly before the remarks of former President Bill Clinton.

As recently as June, Obama encouraged Massachusetts voters to back Warren, saying at an event in Boston, "She is going to be an outstanding senator for Massachusetts, and everybody here has got to turn out for her."

Perhaps as much as she has criticized Brown, Warren has focused her fire on former GOP presidential candidate Mitt Romney, who was formerly governor of Massachusetts.

In her latest ad, she criticizes Washington, D.C., as "rigged for the big guys" who retain lobbyists that small businesses cannot.

Both candidates have raised millions and attracted the interest of national political groups - enough to ensure their ads make it to Bay State television.

- CNN's Steve Brusk and Ashley Killough contributed to this report