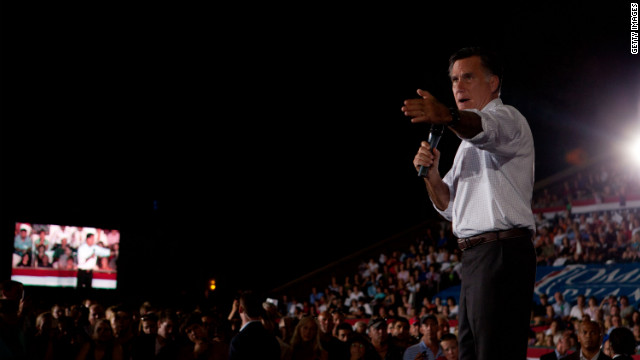 (CNN) – Mitt Romney capitalized on a sobering conclusion to Democrats’ convention high Saturday, painting the party as “completely out of ideas” with an inadequate leader in light of Friday's disappointing job report.

In his weekly podcast, Romney used August’s lackluster job numbers as evidence the weak economy has not improved under President Barack Obama, leaving the incumbent undeserving of a second term in the White House.

August’s jobs report, released the day after Obama accepted his party’s re-nomination at the Democratic National Convention, showed the unemployment rate falling to 8.1% as more workers withdrew from the labor market, and only 96,000 jobs created - not enough to keep up with the population entering the workforce.

“They tried to recapture the spirit of 2008, when then-candidate Obama stood in front of Greek columns and made a lot of promises about how he'd make life better for Americans,” said Romney, referring to Obama’s 2008 Democratic National Convention nomination acceptance speech at Invesco Field in Denver, Colorado.

“He was elected, but things did not get better. Under President Obama, we've endured the worst economic recovery since the Great Depression,” said Romney pointing to the nation’s unemployment rate above eight percent and highlighting the rising national debt.

No president has been elected with an unemployment rate over 8% since Franklin D. Roosevelt took office during the Great Depression. And with only two more jobs reports to come before November's election, Romney urged viewers to consider a change of course.

“I'm asking you to vote for the ticket that's offering real solutions for the middle class, with a plan to create 12 million jobs over the next four years,” said Romney. “A weak economy and unprecedented debt may be the best President Obama can do – but it is not the best America can do.”

But Obama and Democrats have continued to urge voters the president's work is yet to be done, promising brighter economic forecasts and attacking the Republican candidate as bad for struggling, middle-class Americans.

"Today we learned that after losing 800,000 jobs a month when I took office, businesses added jobs for the 30th month in a row. We've added more than 4.6 million jobs," Obama said casting a positive light on the jobs report while campaigning in Iowa Friday.

Obama continued: "But we know that that's not good enough. We can do better. We need to create jobs even faster. We need to fill the hole left by this recession. We need to come out of this crisis stronger than when we went in."