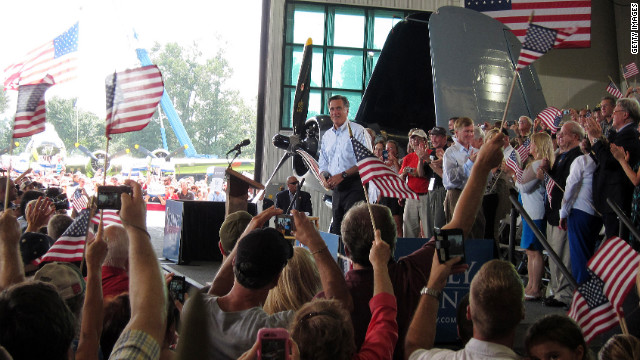 Democrats took heat during their national convention after omitting a reference to God in the party’s platform. The word was hastily reinserted in the ensuing public outcry.

Romney campaign adviser Kevin Madden said Romney was not referring to any push to remove “God” from U.S. currency, but said the candidate was referring “to an example of where a principle like ‘In God We Trust’ is already on public display.”

Romney also focused heavily on patriotism in his remarks to the flag-waving, cheering audience, framing his speech around the pledge of allegiance.

“For me, the pledge of allegiance and the placing our hands over our hearts reminds us of the blood that was shed by those fighting for our liberty,” Romney said to thunderous applause from the audience, many of whom raised their hands when asked whether they were veterans.

Romney - whose own convention speech provoked controversy when he failed to mention the conflict in Afghanistan - said Saturday American troops were “stretched to the breaking point” and offered full-throated support for the armed forces, “particularly those in Afghanistan who are in harm’s way.”

He then launched into a withering critique of President Barack Obama over congressionally-mandated military cuts, called sequestration, which could kick in next year.

“It’s unthinkable to Virginia, to our employment needs, but it’s also unthinkable to the ability and the commitment of America to maintain our liberty, with liberty for all,” Romney said of the cuts, which were part of a congressional deal to force lawmakers to take action on the national debt. “And therefore if I’m president of the United States we’ll get rid of those sequestration cuts and rebuild America’s military might.”

Democrats seized on Romney’s speech and his appearance with Robertson, who did not speak at the event.

“It’s disappointing to se Mitt Romney try to throw a ‘Hail Mary’ by launching extreme and untrue attacks against the president and associating with some of the most strident and divisive voices in the Republican party,” Obama campaign spokesman Lis Smith said, who criticized Romney for being joined at the rally by evangelist Pat Robertson. “This isn’t a recipe for making America stronger, it’s a recipe for division and taking us backward.”