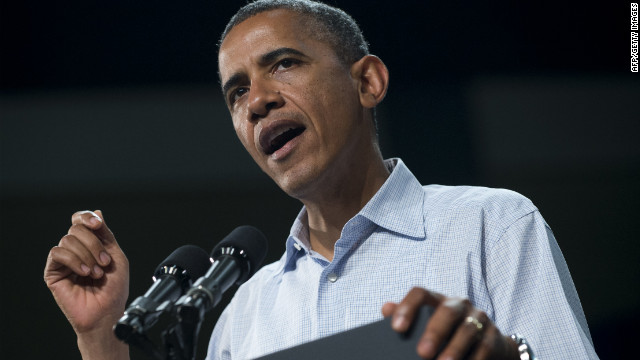 According to the poll released Sunday, Obama has 49% among registered voters nationwide, while Romney has 44%.

The survey was conducted September 2-8, a time window that included the entirety of the Democratic National Convention in Charlotte, North Carolina-as well as two days before and two days after the event.

During the party gathering, major leaders, including former President Bill Clinton, gave prime time speeches on why voters should elect Obama to a second term. The president himself capped off the week Thursday night with a final address.

"If you turn away now - if you buy into the cynicism that the change we fought for isn't possible, well, change will not happen," Obama said, depicting a scenario in which special interests and conservative politicians run Washington and the country. "... Only you can make sure that doesn't happen. Only you have the power to move us forward."

The same poll showed Obama with only a one-point margin (47%-46%) one week ago as he headed into the convention, which came a week after the Republican convention in Tampa, Florida.

Responding to the new numbers, Romney's pollster Neil Newhouse warned against getting "too worked up about the latest polling."

"While some voters will feel a bit of a sugar-high from the conventions, the basic structure of the race has not changed significantly. The reality of the Obama economy will reassert itself as the ultimate downfall of the Obama Presidency, and Mitt Romney will win this race," Newhouse said in a statement.

According to a CNN/ORC International Poll released Tuesday, Romney received a one point bounce after the GOP event, going from 47% to 48% compared to Obama's 49%.

The last time Obama held a five-point margin over Romney occurred on July 1, when the president had 48% and Romney had 43%.

While it's not unusual for a candidate to get a modest boost in the polls after a convention, a senior Obama campaign official said last week that big swings are becoming less common due to conventions now falling so late in the election year.

Speaking with CNN reporters in Charlotte, the official said candidates no longer get double-digit bounces, like the 16-point bump Clinton received after the 1992 convention in New York. Because of higher interest early on and long primary seasons, the "process is fundamentally different" now so that voters get exposed to the candidates much sooner and form their opinions before the conventions.

For the poll, Gallup surveyed approximately 3,050 registered voters by telephone. The sampling error is plus or minus two percentage points.