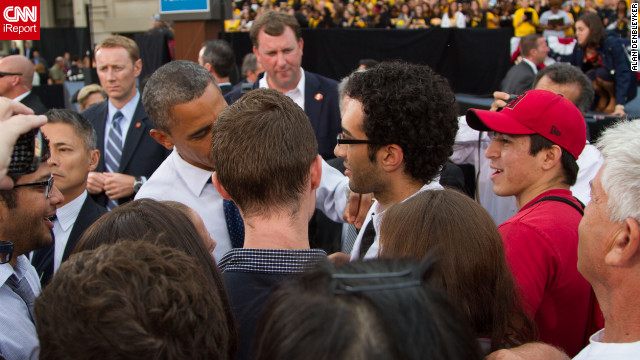 (CNN) – There is one University of Iowa medical student with a lab coat unlike anyone else's in his class.

At a rally on campus Friday, it was signed by President Barack Obama. But the president did not only inscribe his name.

"Go Obamacare!" he penned on the coat of Shadee Giurgius, a first year medical student there.

After trying unsuccessfully to get tickets into a campaign event on the campus headlined by both Obama and Vice President Joe Biden the day after the Democratic National Convention, Giurgius said he eventually landed the tickets unexpectedly on Thursday.

"We were at a TPain concert on campus and this lady comes up to us, 'Hey, I'm on the White House staff, you guys want to go see Obama?'" he told CNN.

Those tickets not only got him into the event, but close enough that when Obama and his wife, first lady Michelle Obama, were shaking hands with the crowd, Giurgius landed the unique autograph.

Photos of the inscribed coat were posted online and the official Twitter account of Obama's campaign posted a link.

"An Iowa med student had a front row spot for the President's speech yesterday-and then this happened," the tweet read.

Obama won the Iowa caucuses in 2008, and in his stump speech on Friday, he touted some provisions of the 2011 Affordable Care Act and criticized Republicans over their opposition to the law.

Obama charged the plan of GOP presidential nominee Mitt Romney would "eliminate health insurance for millions of Americans who are poor or elderly or disabled, just so those with the most can pay less."

The word "Obamacare" was initially coined by Republicans as a criticism of Obama's health reform efforts, although the president has come to embrace it, saying at rallies - such as one on Saturday in Florida, " I do care. So I like the term Obamacare."

Giurgius described himself as a supporter of the president this year and said he supported Obama in 2008, too. His is three weeks into his first year of medical school and studying to be a geriatric psychiatrist.

Obama signed the lab coat Giurgius received at a white coat ceremony earlier this year, and the president's autograph appears above the University of Iowa, Carver College of Medicine logo on the right breast.

Giurgius' interest in politics began as he founded a non-profit focused on young people's awareness of Alzheimer's and other aging issues in 2005 while in college in Los Angeles, he said in a telephone interview.

Giurgius said the health reform law has "affected me personally," citing the provision which would allow some young people to stay on their parents' health coverage to age 26. He also pointed to the law's handling of the prescription drug donut hole and preexisting conditions provision.

"I'm going to have to read up about it and know everything after this Obama signature," he said.

As for the lab coat, Giurgius isn't entirely sure what he'll do with it.

"That was the question of the night," he said of Friday, after Obama's visit. "Are we going to get a new coat? Are we going to wear that one?" Taking into account patients' potential varied reactions, he considered "cover(ing) it up."

"People are telling me to frame it, of course," he added. "I kind of want to wear it. If it's allowed, I'll wear it."