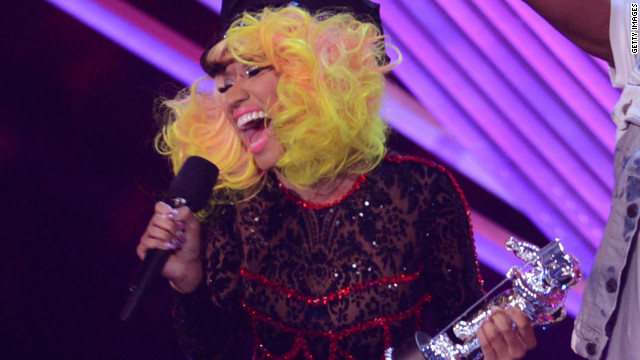 Nicki Minaj on Romney endorsement: Sarcasm, get it?

"I'm a Republican voting for Mitt Romney," Minaj raps in the song. "You lazy b-hes is f-ing up the economy."

Obama told Florida radio station Power 95.3 on "The Obie & Lil' Shawn Show" over the weekend he doubted the seriousness of the lyrics.

"Yeah, I'm not sure that's actually what happened," Obama said Saturday morning of Minaj's apparent endorsement of his opponent. "I think she had a song on there, a little rap that said that. But she likes to play different characters. So I don't know what's going on there."

Minaj tweeted Monday to Obama thanking him for his understanding:

Ha! Thank you for understanding my creative humor & sarcasm Mr. President, the smart ones always do... *sends love & support* @barackobama

Asked if daughters Sasha and Malia listen to Nicki Minaj, Obama said he didn't think so though, "let's face it, they are now hipper than me. There's a certain point where your kids get old enough where they're just hipper than you are."

Obama added that he and Michelle Obama "try to keep up so we've got a nice hip hop collection on our iPods."