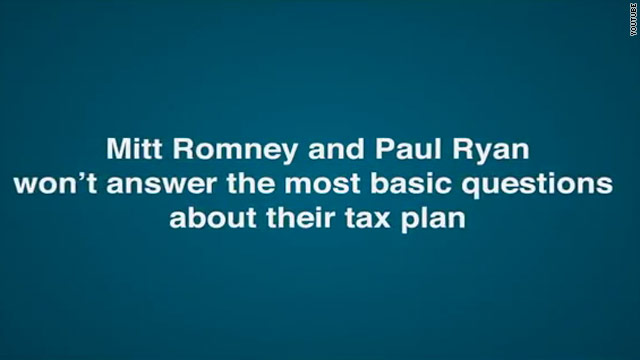 The Obama web video opens up with text on the screen: "Mitt Romney and Paul Ryan won't answer the most basic questions on their tax plan."

It then shows footage from Sunday morning news shows, when Romney and Ryan were pressed about which specific loopholes they would cut in their tax plan.

On CBS's "Face the Nation," however, Ryan did not name any specifics.

"It's not what loopholes are out there, but who gets them," he said. "And we're saying by not having higher-income earners utilize these tax shelters, we can lower tax rates on everybody, because they pay more of their income to taxation."

Ryan said he and Romney would decide on the loopholes by having "a debate out in front" and "work with Congress, work with the public, to find out what are the priorities."

Romney's tax plan calls for 20% cuts to current Bush-era income tax rates. He would also eliminate the Alternative Minimum Tax. Democrats, however, point to a Tax Policy Center report released in August that determined Romney's plan would provide large tax cuts to the wealthiest Americans while increasing the tax burden on the lower and middle classes.

Meanwhile, Romney was also asked to name specific loopholes and deductions in his interview with NBC's "Meet the Press."

"Well, I can tell you that people at the high end, high income taxpayers, are going to have fewer deductions and exemptions. Those– those numbers are going to come down," Romney said.

"This is the last thing we should do if we want to get our economy moving in the right direction," Romney spokeswoman Amanda Henneberg said in a statement. "Mitt Romney and Paul Ryan have a five point plan for a stronger middle class, with detailed policies on tax reform, trade, energy, regulatory reform, and spending that will grow our economy and create 12 million jobs."