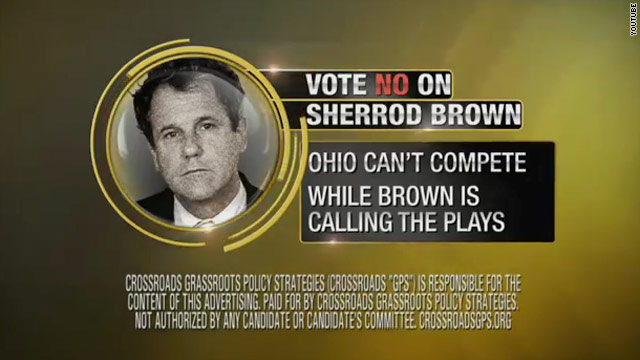 The Karl Rove-backed group, which has already spent tens of millions on conservative candidates and causes, will run the ads for one week in Virginia, Ohio and Nevada.

Two of the spots go after Senate candidate Tim Kaine, a former chairman of the Democratic National Committee, in Virginia. One of the commercials attacks Kaine over education cuts for public schools while he served as governor of the commonwealth, highlighting the cuts as "a kick in the teeth."

The other anti-Kaine ad hits the candidate, who's running against former governor and former Sen. George Allen, for supporting last year's budget deal in Congress that ultimately kicked the can down the road for the country's financial dilemma. Unless members of Congress reach another deal by the end of the year, automatic cuts will be triggered, including massive cuts to the military. Virginia, with several military bases, could see a large portion of those spending decreases.

In Ohio, the group is running a spot that takes aim at incumbent Sen. Sherrod Brown. The football-themed ad says Ohio has lost more than 280,000 jobs "under (Brown's) leadership" and attacks the senator for supporting President Barack Obama's health care reform.

The health care ad also makes mention of more than $700 billion "cut" from Medicare, echoing attacks made by GOP presidential nominee Mitt Romney's campaign. Independent fact-checkers and numerous news outlets have labeled the Medicare claim as false, saying the amount is not a cut, but savings from an expected decrease in costs.

Brown is defending his seat against Republican challenger and state treasurer Josh Mandel.

Meanwhile, a final ad from the latest round of spots goes after Rep. Shelley Berkley, who's running against incumbent Sen. Dean Heller in Nevada. The Crossroads spot also pins the congresswoman for voting to "slash" Medicare and calls her a "desperate politician."

While some super PACs and independent groups, including Crossroads, went up with political spots Tuesday, the presidential campaigns decided to pull their ads to mark the anniversary of the 9/11 attacks.

"It is a sad reflection of the divisiveness of our politics that outside groups like Crossroads GPS cannot set aside false partisan attacks even as our elected officials and citizens of all walks of life, political parties, and religious faiths join together to honor the dead, thank our first responders and service members, and celebrate the freedoms we enjoy as a nation," Kaine said in a statement.