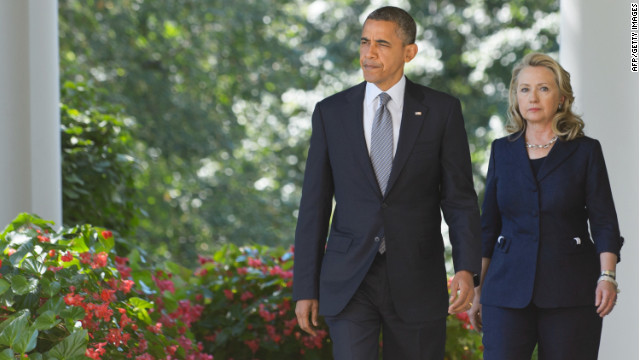 BREAKING: OBAMA SCOLDS ROMNEY IN AN INTERVIEW WITH CBS NEWS... "There's a broader lesson to be learned here. Gov. Romney seems to have a tendency to shoot first and aim later and, as president one of the things I've learned is you can't do that. It's important for you to make sure that the statements that you make are backed up by the facts and that you've thought through the ramifications before you make them.” Asked if Romney's attacks were irresponsible, the president replied, "I'll let the American people judge that."

POLITICAL TICK TOCK: 10:25 p.m. ET Tuesday: The Romney campaign releases their statement regarding the attacks... “I'm outraged by the attacks on American diplomatic missions in Libya and Egypt and by the death of an American consulate worker in Benghazi. It's disgraceful that the Obama Administration's first response was not to condemn attacks on our diplomatic missions, but to sympathize with those who waged the attacks.”

12:11 a.m. ET Wednesday: The Obama campaign responds to Romney’s attack… “We are shocked that, at a time when the United States of America is confronting the tragic death of one of our diplomatic officers in Libya, Governor Romney would choose to launch a political attack.”

9:58 a.m. ET: Secretary of State Hillary Clinton at a news conference in the Treaty Room of the State Department… “This is an attack that should shock the conscious of people of all faiths around the world. We condemn in the strongest terms this senseless act of violence and we send our prayers to the families, friends and colleagues of those we've lost.”

10:19 a.m. ET: Romney doubles down at a news conference in Jacksonville… “I think it's a terrible course for America to stand in apology for our values. That instead when our grounds are being attacked and being breached, that the first response of the United States must be outrage. An apology for America's values is never the right course”

11:32 a.m. ET: Sen. John Kerry, D-Massachusetts, expresses outrage over Romney’s comments: “Gov. Romney's comments are about as inappropriate as anything I've ever seen at this kind of a moment… They demonstrate an insensitivity and a lack of judgment about what is happening right now.”

2:30 p.m. ET: Former Ambassador Richard Williamson, a senior Romney adviser, in an interview with CNN… “The governor made his statement, it was fine, it was acceptable, it was right.”

4:14 p.m. ET: President Obama tells CBS News that Romney "seems to have a tendency to shoot first and aim later."

TRAIL TRIVIA
(Answer below)
On this day in history, Nikita Khrushchev became the leader of the Soviet Union after the death of Joseph Stalin. Who did Khrushchev beat to win the leadership position?

The Republican presidential nominee this morning stood by his Sept. 11th statement criticizing President Obama for failing to properly address foreign policy crises. In a news conference whose stage was crafted to look presidential, Romney was peppered with questions about whether his statement jumped the gun –- as the situation on the ground in the Middle East was evolving –as it turns out, for the worse.

The Romney campaign, with 55 days until the election, tried to defend Romney’s case by encouraging Romney supporters to use very specific “message points” to bolster the candidate’s case.

Here are those talking points, as obtained by CNN’s Peter Hamby:

• We join all Americans in grieving for the four American patriots who lost their lives in yesterday’s attacks and send our condolences to their loved ones.

• This is a time for America to be firm and resolute – and to make clear beyond any doubt that America will not tolerate attacks on our own.

• The violence against the American diplomatic missions in Libya and Egypt underscores that the world remains a dangerous place and that American leadership is sorely needed.

• Over the last several years, we have stood witness to an Arab Spring that presents both opportunity for a more peaceful and prosperous region, but also great peril if the forces of extremism and violence are allowed to control the course of events.

o We must strive to ensure that the Arab Spring is not followed by an Arab Winter.

o American leadership is necessary to ensure that events in the region do not spin out of control.

• We have seen a foreign policy of weakness and decline in American influence and respect. Yesterday, we saw the consequences of this perceived weakness.

• America cannot send mixed signals to either our allies or our enemies.

• We must not be afraid to use our influence to support those who share our values and interests – and to stand firm against those who threaten them. America cannot shrink from its responsibility to lead.

Don’t you think it was appropriate for the embassy to condemn the controversial movie in question? Are you standing up for movies like this?

• Governor Romney rejects the reported message of the movie. There is no room for religious hatred or intolerance.

• But we will not apologize for our constitutional right to freedom of speech.

• Storming U.S. missions and committing acts of violence is never acceptable, no matter the reason. Any response that does not immediately and decisively make that clear conveys weakness.

• If pressed: Governor Romney repudiated this individual in 2010 when he attempted to mobilize a Quran-burning movement. He is firmly against any expression of religious hatred or intolerance.

Reports indicate the embassy in Cairo released its initial statement before the invasion of the embassy commenced. Doesn’t this show they were trying to tamp down the protest and prevent what ultimately happened, not sympathize with the protesters?

• The Administration was wrong to stand by a statement sympathizing with those who had breached our embassy in Egypt instead of condemning their actions.

• Distancing themselves from the statement and saying it wasn't ‘cleared by Washington’ reflects the mixed signals they are sending to the world.

• American leadership needs to be decisive and resolute when our interests are threatened or attacked. For the last four years, this has been lacking.

• We have seen a foreign policy of weakness, indecision, and a decline in American influence and respect – and yesterday we saw the consequences.

• If pressed: The Obama campaign is now attacking Governor Romney for being critical of the same statement the Administration itself disavowed. This is hypocritical.

Did Governor Romney “jump the gun” last night in releasing his statement?

• No. It is never too soon to stand up for American values and interests.

Leading CNNPolitics: Romney's political pretzel over Libya
Has Mitt Romney twisted the narrative of Tuesday's attacks at U.S. missions in Libya and Egypt? A timeline of the events suggests Romney may have been wrong in his accusation that the Obama administration's "first response" on Tuesday was one of sympathy for those who started the violence, as the violence came after the first statement was published.

Leading Drudge: Americans Killed In Libya – Attack 'Coordinated'
The U.S. ambassador to Libya and three embassy staff were killed in an attack on the Benghazi consulate and a safe house refuge, stormed by Islamist gunmen blaming America for a film they said insulted the Prophet Mohammad. Gunmen attacked and set fire to the U.S. consulate in the eastern city of Benghazi, the cradle of last year's U.S.-backed uprising against Muammar Gaddafi's 42-year rule. Another assault was mounted on the U.S. embassy in Cairo. – Hadeel Al Shalchi for Reuters

Leading HuffPo: 'Utter Disaster'
On Wednesday morning, hours after the deaths of four U.S. diplomats, including the U.S. ambassador to Libya, Mitt Romney put his campaign on the line by attacking President Barack Obama and the besieged diplomats in the Middle East. – Ryan Grim and Joshua Hersh

Leading Politico: Mitt Romney digs in on Obama ‘apology’
Veering away from the political caution and relentless economic focus that have defined his presidential campaign, Mitt Romney repeatedly charged the Obama administration with a “disgraceful” and conciliatory response to yesterday’s riots in North Africa that left an American ambassador and multiple diplomatic aides dead. – Alexander Burns and Maggie Haberman

Leading The New York Times: Embassy Attacks Fuel Escalation in U.S. Presidential Race
The deadly attack on Americans in Libya fueled a harsh escalation of the presidential campaign in the United States on Wednesday as Mitt Romney assailed President Obama’s handling of the situation, while Democrats accused Mr. Romney, the Republican nominee, of politicizing an international crisis. – Peter Baker

- Romney says he wouldn’t hesitate when he sees ‘a violation of our principles’ -
A REPORTER QUESTIONS ROMNEY AT A PRESS BRIEFING IN JACKSONVILLE, FLORIDA:
UNIDENTIFIED FEMALE: Some said you jumped the gun with that statement last night and should have waited until more details were available. Do you regret having the statement come out?
ROMNEY: I don't think we ever hesitate when we see something, which is a violation of our principles. We express immediately when we feel that the president and his administration have done something, which is inconsistent with the principles of America. Simply put, having an embassy which is - has been breached and has protesters on its grounds, having violated the sovereignty of the United States, having that embassy reiterate a statement effectively apologizing for the right of free speech is not the right course for an administration.

- We tried cutting taxes, reducing regulations -
MASSACHUSETTS SENATE CANDIDATE ELIZABETH WARREN IN A FORTHCOMING ARTICLE IN THE NEW YORKER BY JEFFREY TOOBIN: “This is a story about how government gets used. Government gets used to protect those who have already made it. That becomes the game. And so we had the big crash, and I thought, OK! We tested the alternative theory. Cut taxes, reduce regulations and financial services, and see what happens to the economy. We ran a 30-year test on that and it was a disaster.”

- Kaine compares his time as governor with Allen’s -
VIRGINIA SENATE CANDIDATE TIM KAINE IN A NEW TELEVISION AD: “As governor, I cut 5 billion in spending, balanced the budget and cut my own pay. George Allen increased spending 45% as governor, helped turn a record surplus into a massive deficit as a senator, voted four times to raise the debt ceiling, and voted four times to raise his own pay. Now that’s a real difference.”

In September 1953, the influential leader of the Soviet Union, Joseph Stalin, died of a cerebral hemorrhage. The solidified power structure of the USSR reacted and a fight began to brew over who would succeed the deceased leader.

The leadership struggle became a fight between Georgy Malenkov and Nikita Khrushchev. Although Malenkov had been Stalin’s chosen successor, Khrushchev won the fight, was made secretary of the Communist Party and Malenkov became the ceremonial premiere.

After coming to power, Khrushchev, in many ways, repudiated his successor for violations of “Leninist norms of legality” and the cult of personality that Stalin created.

Khrushchev would go on to play an important role in both Soviet and American history. From the Cuban Missile Crisis to the escalation of the Cold War, the soviet leader became almost a household name in the United States during his time in power.

Congratulations to Matthew Gilbertson (‏@MattRGilbertson) for winning today’s Gut Check Trivia Question. It was a hotly contested question, although there were a number of incorrect answers. Greg Dean (@gregdean11) took three shots at it, even though he got the correct answer on the first try. Thanks for playing, all.