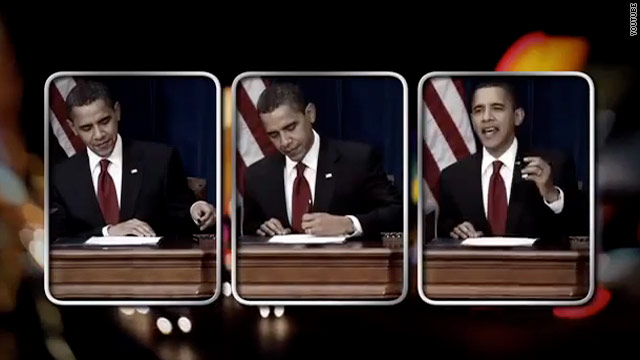 (CNN) - Ahead of President Barack Obama's campaign trip to Las Vegas Wednesday, the private arm of the Karl Rove-backed super PAC American Crossroads released a new ad in Nevada targeting the president over the economy.

"After gambling your money on his failed stimulus, President Obama says, 'Don't blow a bunch of cash on Vegas'," the ad's narrator says. "He doesn't get it. In Nevada, tourism means jobs. Under Obama, nearly 62,000 fewer Nevada jobs."

The ad's Vegas reference links back to a February 2010 town hall in New Hampshire, where the president drew criticism from some Nevada natives–including Senate Majority Leader Harry Reid–for using the city in an analogy about government spending.

"You don't go buying a boat when you can barely pay your mortgage," Obama said. "You don't blow a bunch of cash in Vegas when you're trying to save for college. You prioritize. You make tough choices. And it's time your government did the same."

Republicans have resurfaced the quote this cycle to attack the president in the crucial swing state.

Crossroads GPS, which has already spent tens of millions on conservative candidates and causes, dropped nearly $1.4 million on the ad, titled "Bunch of Cash." The spot will run for 10 days, while a Spanish language version will run for three weeks in the Western state.

Nevada suffers from one of the highest unemployment rates in the country at 12%, according to the U.S. Bureau of Labor Statistics. The state was also hit by a severe wave of home foreclosures during the housing crisis.

"Our home values: gone," the narrator says. "America's worst recovery, and a new recession could mean more jobs lost. But as Nevada struggles, Obama says 'Don't blow a bunch of cash in Vegas.'"