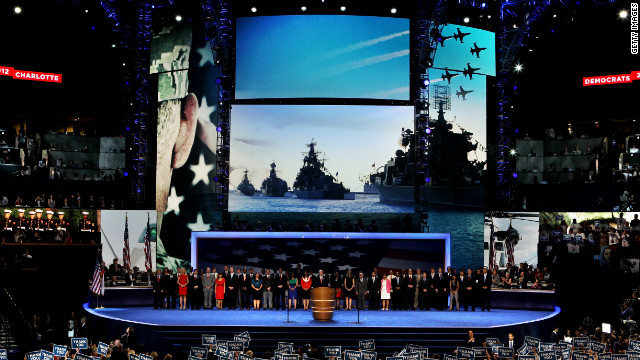 (CNN) - Democratic convention officials issued an apology Wednesday for showing an image of Russian warships during a presentation that honored U.S. veterans at the Democratic National Convention.

The photo came on screen during a tribute on the final night of the gathering last week, as Adm. John Nathman and other veterans spoke on stage. The Navy Times first reported the apology.

After a former sailor at the event identified the warships, which appear to belong to the Russian Black Sea Fleet, the veteran asked for an apology, the Navy Times reported.

In its formal apology, the Democratic National Convention Committee attributed the mistake to a "vendor error."

"Due to vendor error, incorrect images appeared briefly on screen behind fifty-one veterans during the convention and the DNCC apologizes for this mistake," a convention official said in a statement. "This error should not distract from the words of Admiral Nathman and others who spoke to President Obama's strong record on issues that impact those who have served our nation."

A naval expert, a former editor of "Combat Fleets of the World," interviewed by the Navy Times said he believes the photo was taken "at least six years ago at a Navy Day parade near Sevastopol, Ukraine."

Furthermore, several planes flying over the ships were also spotted in the photo and believed to belong to another country. A separate expert, a former Air Force pilot, told the Navy Times the planes likely belonged to the Turkish Air Force.

In the statement, however, the Democratic official did not hesitate to pivot and criticize Republican presidential nominee Mitt Romney and his omission of the military from his acceptance speech at the Republican National Convention.

"We're proud of the service and sacrifice of our veterans and military families, and while they were an important and active part of our convention, Mitt Romney failed to even mention them in his speech in Tampa."