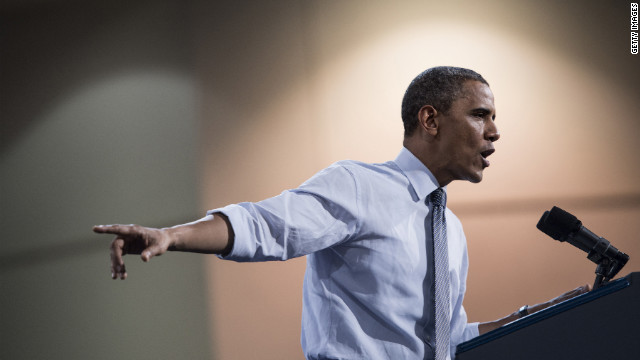 "As for the ones we lost last night, I want to assure you we will bring their killers to justice," he said to loud cheers from a crowd of supporters that numbered more than 8,000 in a packed convention room just north of the Las Vegas strip.

The comments marked Obama's first reaction at an overtly political event to the news of the deaths of U.S. ambassador Chris Stevens and three other State Department employees. The president weighed in twice earlier Wednesday, first in a statement from the White House Rose Garden. Later in the day, Obama took a shot at his opponent’s reaction to the events, saying in an interview with CBS News that GOP presidential nominee Mitt Romney “seems to have a tendency to shoot first and aim later, and as president, one of the things I've learned is you can't do that."

There was speculation the Obama campaign would cancel the Las Vegas rally in light of the tragedy.

While the campaign ultimately decided to press on with the event, its tone was decidedly scaled down. Obama refrained from his sharpest political barbs, did not mention rival Mitt Romney by name as he usually does, and entered absent his trademark introductory song, U2’s “The City of Blinding Lights.” The campaign later confirmed the absence of music was a deliberate effort to rein in the usually charged atmospherics of a campaign event.

Obama also addressed the killings in a conference video with grassroots supporters before the Las Vegas event, telling volunteers, "Our hearts are broken for the families."

"The sacrifices that our troops and our diplomats make are obviously very different from the challenges that we face here domestically but like them, you guys are Americans who sense that we can do better than we're doing," he also told the volunteers.

The president will head to Colorado late Wednesday ahead of a campaign event in the Denver area Thursday morning.