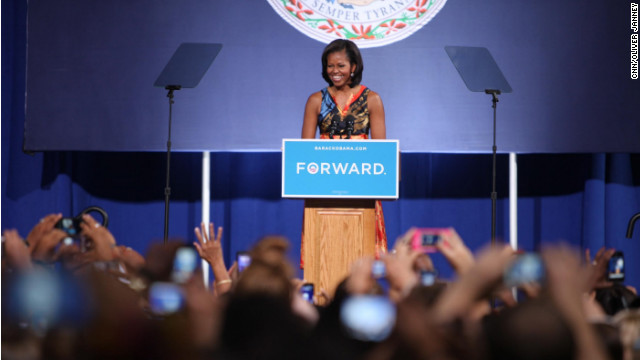 Fredericksburg, Virginia (CNN) – After a well-received convention address, first lady Michelle Obama jumped back on the campaign trail Thursday to make an appeal to supporters for her husband's re-election in Virginia as a part of a two-city cruise through the battleground state.

After paying respect to the American diplomats killed in Libya Tuesday, the first lady focused on her campaign message, breaking down the numbers in Virginia and telling the crowd her husband won the state by 235,000 votes in 2008 but that might not suffice this election cycle.

"It could all come down to a few battleground states like Virginia," said Mrs. Obama to a crowd of over 2,000 at the University of Mary Washington in Fredericksburg. "This room alone could swing an entire precinct for Barack Obama."

Mrs. Obama was scheduled to visit Fredericksburg on July 20 but the event was cancelled following deadly shootings in Aurora, Colorado.

The Old Dominion has been considered a battleground state in the 2012 election cycle since Obama's 2008 win, besting Sen. John McCain 53% to 47% and becoming the first Democrat to win the state since Lyndon B. Johnson in 1964.

"If we win Virginia, we will be well on our way to putting Barack Obama back in the White House," said the first lady.

Mrs. Obama ticked off the Obama administration's accomplishments to the energetic crowd of college students and local Virginians over the past four years including healthcare reform and the killing of Osama bin Laden–topics touted heavily at their party's convention.

The first lady also reiterated her and many of the Democratic convention speakers' line explaining the continually poor state of the economy as a situation the president stepped into taking office in 2008.

"Think back to when Barack first took office and this economy was on the brink of collapse," said Mrs. Obama, painting a picture of her husband as a humbled and values-driven leader. "But instead of pointing fingers or placing blame, Barack got to work."