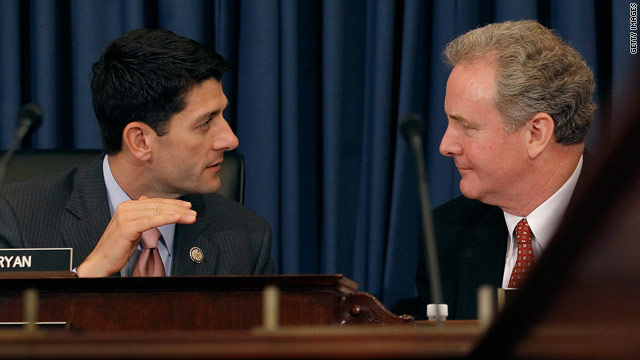 While Ryan has been barnstorming battleground states and getting prime time television coverage for his recent convention speech, on the Hill he made no public comments nor participated in any congressional debate, choosing to keep his public presence there low key.

But behind the scenes, Ryan was greeted like a rock star. Shortly after he arrived he was ushered into a reception in one of Speaker Boehner's conference rooms, far out of view from cameras and reporters. House Republicans lined up, some waiting for 20 minutes, to get their picture taken with him, and get a minute or two to chat about life on the campaign trail.

When Speaker Boehner escorted Ryan from his office to the House floor, he was trailed by a throng of reporters, and as Ryan entered the House chamber, he was greeted by applause from his GOP colleagues.

Kentucky Republican Rep Brett Guthrie told reporters after his brief visit with Ryan, "we're all proud of him."

Guthrie showed reporters a copy of a program from the Republican National Convention that he brought for Ryan to sign for a young constituent. He said Ryan was already planning to do a campaign stop for him when he visits Kentucky for the vice presidential debate next month.

House GOP Whip Kevin McCartthy said Ryan personally called House GOP conference Chairman Jeb Hensarling and asked for Thursday's get together with fellow Republicans. McCarthy said Ryan has a lot of personal friends who wanted to "say hi and congratulate him." Many of Ryan's colleagues said he enjoyed his time behind closed doors.

Ryan's decision to avoid the spotlight is perhaps not surprising. Republicans are mindful approval ratings for Congress are at record lows.

"Rep Steve Israel, the House Democrats' campaign chief, seized on that dynamic, telling reporters at a briefing timed to coincide with Ryan's visit, "if you are a Republican incumbent, you are less popular than any profession... you are toxic."

The Wisconsin congressman, who is simultaneously running for his House seat and for vice president alongside presidential nominee Mitt Romney, spent less than two hours in the Capitol. He voted for the six month government funding measure - the purpose of his trip - while 70 House Republicans opposed it.

Federal agencies are scheduled to run out of money at the end of the month, but the "continuing resolution" avoids any politically risky talk of a government shutdown. The bill keeps the current level of funding - $1.047 trillion, a figure leaders agreed to in last summer's debt deal. But that number is roughly $20 billion less than what's in the House GOP budget – a budget Ryan crafted as Budget Committee chairman and which passed the House earlier this year.

Ryan also voted for a Republican bill that directs President Obama to come up with a plan by October 15th to replace the automatic cuts scheduled to go into effect in January as part of the debt deal. Ryan and most House Republicans voted for the debt deal that set those cuts in motion. The vote on Thursday was part of an effort to shift the blame for those cuts to President Obama and congressional Democrats. But even though the measure came out of the Budget Committee, he didn't participate in any of the debate on the House floor, leaving it to the number two Republican on his committee, Rep. Scott Garrett, R-N.J., to lead the GOP arguments.

It wasn't just House Republicans who were happy to see Ryan back in Washington.

House Democratic Leader Nancy Pelosi released a video titled "Welcome back Mr. Ryan!" that started with the theme song from 70's television show "Welcome Back Kotter" and included two minutes worth of TV clips of Ryan defending his controversial proposal to overhaul Medicare.

Israel spent much of his morning session with reporters arguing that Ryan's selection for the GOP ticket was a key reason Democrats chances of picking up seats in the House were improving.

"Paul Ryan has become a down ballot disaster for Republicans," Israel said. He said House Democrats worked for months to make Ryan's Medicare proposal a central campaign theme, and said they were having some difficulty gaining traction with that strategy until Romney picked Ryan to be his running mate.

"Mitt Romney grabbed the megaphone from us when he chose Paul Ryan. He branded this debate and gave us the debate we wanted," Israel said.

Demonstrating how much they believe the issue would motivate voters, Israel showed a series of television ads that Democratic challengers are running, many of which zeroed in on House Republicans' vote for Ryan's budget - one that Democrats repeatedly argued would "end Medicare."

But at least two of the House Republican freshmen Israel cited as prime targets for that argument didn't shy away from linking themselves to Ryan. Rep. Nan Hayworth, R-NY, said she waited for about 15 minutes to get her picture taken with Ryan. Fellow New Yorker Rep. Ann Marie Buerkle also met with Ryan and told reporters she didn't think the Democratic strategy to use her vote for the Ryan budget would hurt her in November.

A top Senate Democrat also welcomed Ryan's visit. Senator Chuck Schumer went to the Senate floor to deliver an entire speech arguing that the GOP vice presidential candidate was making misleading campaign speeches blaming Democrats for the same across the board spending cuts that he voted for last summer.

"There you go again, Paul Ryan," Schumer said, adding, "He blamed the President - solely the President - for the year-end trigger, the sequestration that was part of the Budget Control Act. Never mind that Congressman Ryan voted for the very same sequestration himself. Never mind that it was his side's idea, in fact, to hold our credit rating hostage in the first place, and insist on these dollar-for-dollar cuts that he now decries."

Utah GOP Rep. Jason Chaffetz said he was happy to see Ryan, but he also gave him some campaign advice: "Get out of here and go back to Ohio!"

Ryan seemed to take that to heart as he slipped out a back stairway, and carefully avoided reporters' questions. He did predict that the Green Bay Packers would beat the Chicago Bears in their Thursday night game.