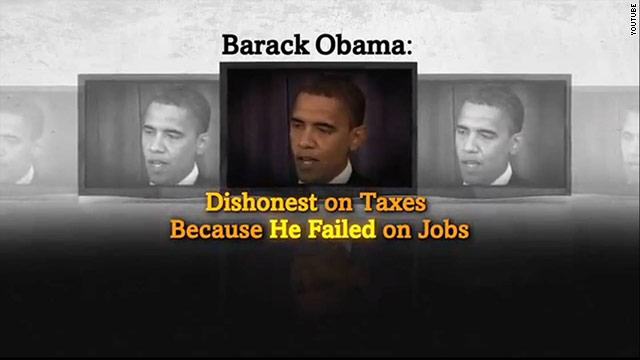 The conservative group said its $5.3 million ad buy responds to the Obama campaign's criticism that Romney's tax plan hurts middle and low-income Americans. The Crossroads spot will begin airing on broadcast TV stations and cable networks Friday for one week in the swing states of Colorado, Iowa, New Hampshire, Nevada, Ohio and Virginia.

Team Obama's most recent ad was released Wednesday and attacks Romney for failing to give further details on his tax plan as well as criticizes his proposal as unfair to middle-class Americans. The campaign said the ad will air in Iowa, Nevada, Virginia and Ohio.

"Obama promised…" the ad narrator says followed by a television clip of Obama promising to not raise taxes on families whose annual income is less than $250,000 per year.

"Barack Obama: Dishonest on taxes because he's failed on jobs," the ad concludes.

The Obama campaign ads, as well as outside groups supporting Democrats, have pointed to a report by the nonpartisan Tax Policy Center that concludes under Romney's tax plan wealthy Americans would receive large tax cuts, increasing the tax burden on the lower and middle classes.

The Romney campaign has said the study is flawed because it does not take into account his full plan, failing to account for additional revenue that would result from a reduction in the corporate tax rate.

Crossroads called the Tax Policy Center report "discredited" in a statement about the ad buy and says Obama's ad relies "on a now debunked study, based on hypothetical assumptions, to assert that Governor Romney supported tax increases."

The Tax Policy Center, however, has stood by the findings in their August report.

"President Obama raised taxes on the middle class, and his campaign is dishonestly smearing Gov. Romney to change the subject away from his own tax hikes and the economy that he mishandled over the last four years," said Crossroads GPS president and CEO Steven Law in a statement about the ad.