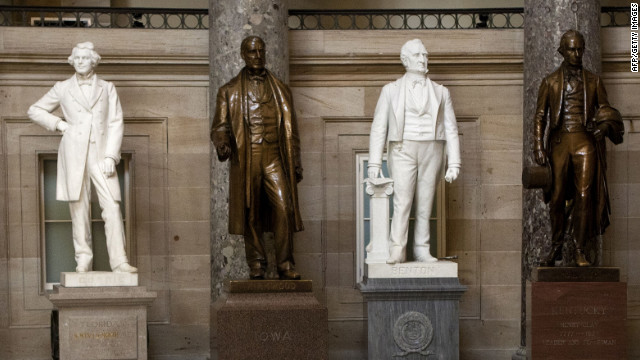 District of Columbia to get statue in Capitol, but not in Statuary Hall

Washington (CNN) - The District of Columbia received more representation in the halls of Congress this week. Only problem: this representative is bronze, not breathing and honors someone dead for over 100 years.

Legislation passed this week by both the House (by voice vote) and the Senate (by unanimous consent) will allow the District of Columbia to submit the statue of Fredrick Douglass, a notable abolitionist and resident of Washington, D.C., to "a suitable location in the Capitol."

It will not, however, include the Douglass statue in the Statuary Hall collection, a desire that many who had pushed for Douglass' inclusion had hoped for.

The Statuary Hall collection is a group of 100 statues, two from each state, and includes some of American's most notable luminaries. There are the obvious – George Washington from Virginia, Ronald Reagan from California – and the not so obvious – Father Damien from Hawaii, Sarah Winnemucca from Nevada.

At no point does the bill mention Statuary Hall – instead it suggests a "permanent location in the Capitol" within two years of passage. A press release by Democratic Senator Chuck Schumer of New York, the sponsor of the legislation, says the statue will be placed in Emancipation Hall, an area not actually in the U.S. Capitol but instead in the Capitol Visitors Center.

Even though Congress' decision does not increase the influence that Washington, D.C. has in Congress, one local political expert says that symbols matter and Douglass' inclusion is a symbolic victory.

"We have to take what we can get," said Mark Plotkin, a district political expert. "The Congress has turned down every attempt to assert our own autonomous identity. I think this is most significant because it actually acknowledges that 618,000 people live here."

The fight to get district representation in Statuary Hall first started in 2002, when Norton, the non-voting member from D.C., introduced a bill that would allow two statues for the district in Statuary Hall.

Douglass' statue was first commissioned by the D.C. government in 2007 for the price of $200,000. When neither was placed in Statuary Hall after completion, as city government had hoped, they were displayed in a government building just a few short blocks from the Capitol.

When the statue does move into the Capitol, it will become the third statue of an African-American to be displayed in the building. The other two: a bust of Martin Luther King Jr. and a bust of Sojourner Truth.

Schumer, the bill's sponsor, says the legislation has been sent to President Barack Obama and now awaits his signature.