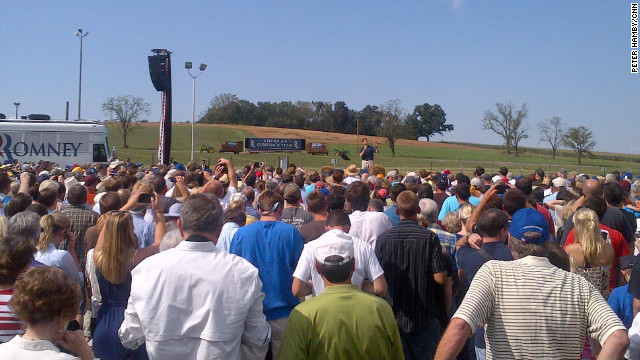 Rockingham County, Virginia (CNN) - With the bodies of four Americans killed in Libya returning to native soil on Friday, Paul Ryan pivoted back to his routine stump speech at an event in Virginia and avoided the sharp attacks on President Obama's foreign policy that have characterized the Republican campaign in recent days.

Ryan opened the event – a sun-splashed outdoor rally set against the backdrop of the lush rolling hills of the Shenandoah Valley – by asking for a moment of silence for those killed during Tuesday's breach of the U.S. diplomatic mission in Benghazi, Libya.

"First off, we just moments ago witnessed and watched the bodies of the four slain diplomats arrive at Andrews Air Force Base from Libya," he said. "And I'd like to ask for a moment of silence for our Ambassador Christopher Stevens, Sean Smith, Glenn Doherty, and Tyrone Woods. Let's have a moment of silence in prayer and recognition for these heroes."

After a pause, Ryan thanked the veterans in attendance and moved on to a series of familiar criticisms about the president's economic record.

Ryan's trip to the Rockingham County Fairgrounds near Harrisonburg marked the Romney campaign's first appearance in this reliably-red part of Virginia. Rockingham and Augusta Counties can usually be counted on to deliver healthy Republican margins in statewide races.

John McCain and Sarah Palin did not campaign here in 2008, while President Obama campaigned in the smaller and more Democratic city of Harrisonburg, home to James Madison University. He has not returned to the region during the 2012 campaign.

Roughly 3,000 people showed up to see the Vice Presidential nominee speak on an outdoor stage book-ended with bales of hay.

Ryan, an avid hunter, played to the rural crowd.

The sizeable crowd was a welcome sight for the small batch of Republican operatives who have been working furiously to identify new voters in the commonwealth and reverse the embarrassment of 2008, when Obama defeated McCain in the state by six points.

The Republican Party of Virginia and the Romney campaign have made more voter contacts this year than during the entire 2008 and 2009 election cycles combined, according to a Virginia GOP source who did not want to be named discussing internal strategy.