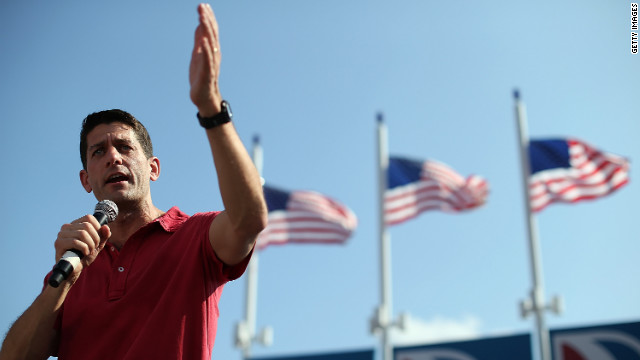 The Federal Reserve this week announced a new round of quantitative easing, the central bank's program to increase the money supply by buying up billions of dollars worth of debt held in mortgage-backed securities.

The week's move by the Fed, known as "QE3," has become a campaign talking point for Republicans, including GOP presidential candidate Mitt Romney.

Critics say the central bank's effort is inflationary, and argue it's yet another sign that President Obama has failed to turn around the limp economy.

"One of the most insidious things a government can do to its people is to debase its currency," Ryan said at an outdoor rally in Oldsmar, Florida. "We want honest money; that means we want honest government. It's one and the same. Now the secret to prosperity is not more money printing."

Ryan said QE3 might help banks on Wall Street but will do little to help middle-class families.

"We don't need sugar high economics; we don't need synthetic money creation," he said. "We need economic growth. We want wealth creation. We don't want to print money. We want opportunity and growth. And when they do this to our money, it undermines the credibility of our money."

The Obama campaign rejected Ryan's effort to tie the administration to big banks, pointing to independent studies showing that Romney's tax plan favors high-income earners at the expense of the middle class.

"Congressman Ryan has no credibility when it comes to helping the middle class," said Obama spokesman Danny Kanner.