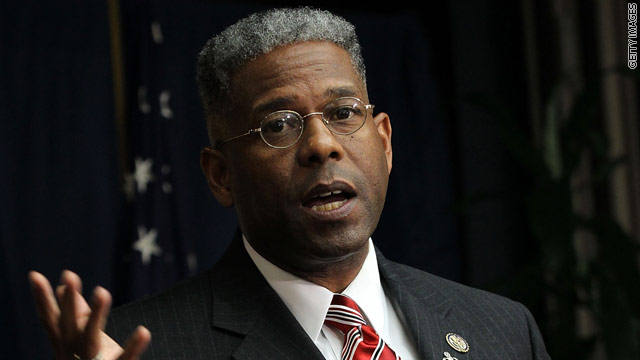 (CNN) - Rep. Allen West of Florida cited his military experience on Saturday in the Republican weekly address, where he called for action from the Senate and White House on the sequester set to begin in January.

"I spent 22 years in active duty in the United States Army and served in several combat zones," the retired lieutenant colonel said. "I can not understate the amount of damage these cuts would do to our military. They would essentially hollow out our armed forces."

"Mr. President, for you, the Commander in Chief of our armed forces, to sit idle and do nothing while this dark cloud hangs over our military - it is shameful, it is irresponsible, and it is wrong," he said.

Included in the cuts - which would reduce the federal deficit by approximately $1 trillion over the next decade - are reductions in defense spending, as well as nearly every other area. On Friday, a White House report found the cuts "would have a devastating impact on important defense and nondefense programs."

While House Republicans have acted to find alternatives to these cuts, the Democrat-controlled Senate and White House have not, he said.

"The president himself has opposed or disregarded every attempt we've made to work with him on a solution," West said. "Dodging his responsibility is how the 'sequester' came about, so it is no surprise the president is doing the exact same thing now."

West called to mind violence in the Arab world this week - including that which led to the death of four Americans at a U.S. consulate in Libya - as a sign of "how critical it is that the United States projects strength," including military strength.

"It is because of these threats that America must continue to fund its military and support its armed forces to the fullest extent," West said. "The lives of all Americans depend on it, as do the memories of Ambassador Chris Stevens and the public servants who perished with him."