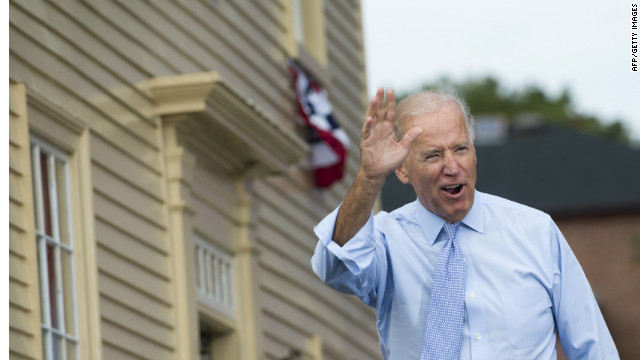 Muscatine, Iowa (CNN) - At a brief stop in Iowa on Monday, Vice President Joe Biden jokingly graded his own political success this way: he failed as a presidential candidate but has succeeded as vice president.

Biden's comments came during a stop at a farmer's market and restaurant in Muscatine, Iowa, ahead of an afternoon campaign rally.

As the vice president ate a bowl of soup, with a slice of coconut cream pie standing by, he told a group of four elderly women seated with him: "There's only a few people, including Iowans, who've been in all 99 counties. I'm one of them. All you got to do is run for president, you'll be in all 99 counties."

Biden continued: "You know what, on the way on the plane - show you how effective I am - my political guy said, 'I went back and got your schedule for just the last time around.' When I was trying to get the nomination I spent 120 days in Iowa. You saw how effective I am. I mean."

"But I'm a good vice president," Biden added with a laugh.

The vice president also managed to take a mild swipe at the man who would like his job.

As Biden ate his soup, he said: "I'd like you to know that you can let the congressman [know] I'm eating Wisconsin cheese soup" - a clear reference to Mitt Romney's running mate, Rep. Paul Ryan of Wisconsin.

Biden added: "That's what I was told. They said Wisconsin cheese. It's good."