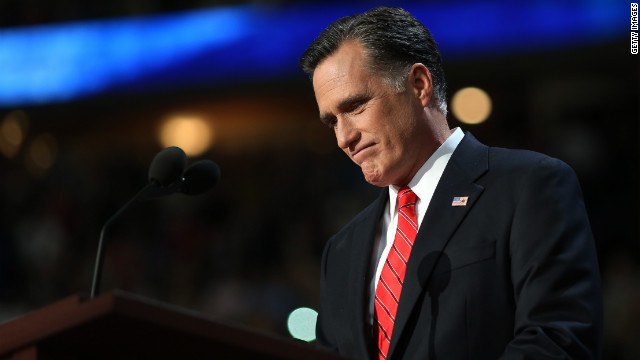 (CNN) - Democrats were quick to denounce comments made by Mitt Romney in a old video that emerged online Monday.

The Republican nominee could be heard in the film–secretly recorded at a private fund-raising event earlier this year–saying nearly half of Americans will automatically vote for President Barack Obama because they are "dependent" on Americans.

"I'll never convince them they should take personal responsibility and care for their lives," he added. "What I have to do is convince the 5% to 10% in the center that are independents, that are thoughtful."

The videos were posted Monday afternoon on the left-leaning news websites The Huffington Post and Mother Jones. The person responsible for the footage said he or she wishes to remain anonymous for "professional reasons and to avoid a lawsuit," according to the Huffington Post.

Democrats, however, sharply took issue with Romney's "47%" comments, as well as other remarks he made in the video:

"Carol, I have to say, you know, I've worked for the president for five and a half years. He ran to represent the entire country. Even when people don't agree with him, he wakes up every day wanting to solve the challenges of everybody in this country. Mitt Romney wrote off nearly 50% of people in this country before he's even sworn into office. This is something that I think is shocking and really alarming to people who want to bring this country together and are scratching their heads about what he said."

"This moment of candor from Mitt Romney once again shows he has no understanding of what average Americans go through. His worldview is too narrow for him to ever make a good President."

"Today Mitt Romney once again demonstrated how out of touch he is with the issue facing our communities. The bottom line is that the problem isn't that Mitt Romney is not Latino, it's that he's on the wrong side of every Latino voter's priorities. Mitt Romney has made it crystal clear that he would veto the DREAM Act, reduce funding for Pell Grants and repeal Obamacare-all of which would have deep negative impacts in our communities."

"It's not about being a Latino that would make Romney a better candidate. Latinos, and all Americans, look at the substance of a candidate's proposals to determine who is the better candidate and who best represents the priorities of their community. That is why upon examining the policies willingly supported by Romney on the economy, health care, and immigration, Latinos overwhelmingly support President Obama.

"Throughout this campaign, many people have had lingering questions about Governor Romney's values and the sincerity of his positions. But behind closed doors with a group of his multimillionaire donors, he revealed how he really feels. Incredibly, Mitt Romney has no use for nearly half of our fellow citizens, yet he seeks to hold our nation's highest office, where his policies would dramatically affect the lives of the people he so completely disregards.

"It is difficult to imagine how a person who seeks the office of the presidency would be so divisive and have such contempt for his fellow Americans. But it is clear that Mitt Romney does not deserve to lead our great country and the ambitious, diverse, and talented people who call it home."