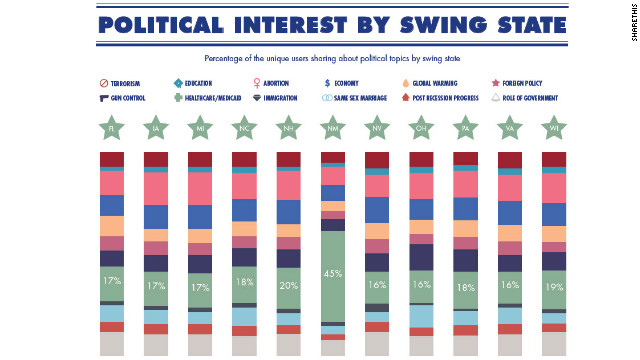 Washington (CNN) - Of all the major issues our country is facing, stories relating to health care legislation are being shared online in key battleground states more than any other issue, according to data from social sharing company ShareThis.

According to information provided to CNN, 16.1% of total shares in 12 battleground states are stories about health care. Over 12% of shares are on stories relating to abortion, followed by education, the economy, role of government, gun control, environment, same-sex marriage, terrorism and foreign policy. Immigration is the least shared-issue with only 1.7% of all shares. Users from New Mexico share health care stories the most – at 45% – followed by New Hampshire at 20%.

One example of a shared health care story was an August 31st opinion column by Paul Krugman in The New York Times entitled "The Medicare Killers," a piece suggesting that a Romney administration would kill the Medicare program. The article amassed over 500 comments on the New York Times web site – both positive and negative.

ShareThis offers social media sharing buttons on more than 2,000 websites with political content, including CNN Money, ABC News, Boston Globe, Chicago Tribune, Los Angeles Times, New York Magazine and the Atlanta Journal Constitution. The company boasts that they reach over 190 million unique users through these websites. Thousands of other new sites are also counted in the data, as ShareThis offers options to share any page on the internet through a web browser plug-in.

The company analyzed the activity of more than five million unique users in 12 swing states during the month of August who are sharing content on Facebook, Twitter and dozens of other social media platforms.

The data doesn't measure sentiment of each post and though it isn't a scientific poll, it does provide insight into which topics are generating the most online buzz in each state.

The ShareThis data from the 12 states isn't far off from national polling. According to a CNN/ORC poll from September 14th, 48% said healthcare is the most important domestic and social issue, followed by education with 33%. 7% chose gun policy, 6% said abortion, and 5% selected gay marriage.

However, the CNN/ORC poll finds that the economy is more important than any other type of issue to registered voters, with 59% saying they care about economic issues the most, 33% caring about domestic and socials the most, and only 4% choosing foreign policy.

"Generally, people share content they are passionate about," ShareThis Chief Technology Officer Nanda Kishore said in an interview. Kishore went on to explain that the company can see the nuances of what people like to share in each network. For example, he says people tend to share more polarizing content via email than on Facebook, which often reaches a wider audience, while the content shared on LinkedIn tends to be topics related to people's professions. As far as amount of content shared, the average is about 10 articles per person each month.