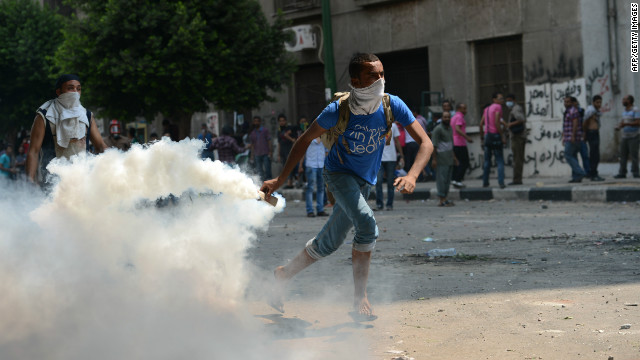 (CNN) – Americans who were closely following developments in last week's attacks on American diplomatic posts in Egypt and Libya were more likely to favorably rate President Barack Obama's handling of the dilemma than they were Mitt Romney's, according to a poll released Monday.

The attacks last week on the U.S. embassy in Cairo and an American consulate in Benghazi, Libya, drew sharp reaction from Romney. The GOP presidential nominee initially issued a statement last Tuesday night, as reports indicated an American diplomatic worker in Benghazi had been killed in an attack. The Republican candidate's statement was sent before news broke that the American ambassador to Libya, J. Christopher Stevens, had been killed in the attack.

In separate protests in Cairo, several men scaled the walls of the U.S. embassy and tore down its American flag. The violence in both Libya and Egypt stemmed from anger about an online film considered offensive to Islam.

In his statement, Romney said he was "outraged" by the attacks in Benghazi and Cairo, but took harsh aim at the Obama administration for what he characterized as a weak response to the violence.

"It's disgraceful that the Obama Administration's first response was not to condemn attacks on our diplomatic missions, but to sympathize with those who waged the attacks," Romney wrote, an apparent reference to a statement from the U.S. Embassy in Cairo that denounced the anti-Islam film that is the source of the protesters' anger. The embassy's statement was released before protesters stormed the American embassy in Cairo on Tuesday.

Reaction to Romney's remarks was mixed. While some Republicans defended their party's presidential nominee, others were more critical, saying Romney had acted too quickly to inject politics into the still-developing situation.

The Pew Research Center poll surveyed 854 Americans who said they were closely following the news in Libya and Egypt. The poll was taken by telephone between September 13-16, and the sampling error was plus or minus 3.9 percentage points.