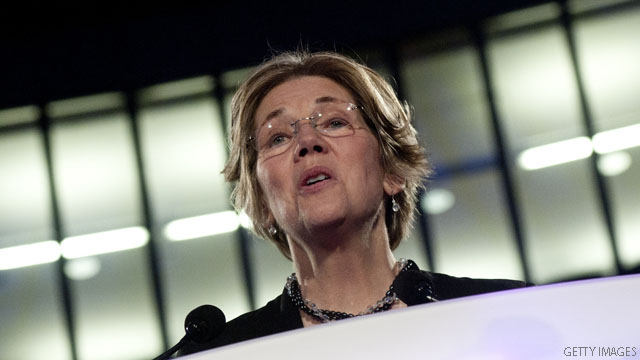 Poll: Warren moves ahead of Brown in Mass. Senate race

(CNN) - Democratic Senate candidate Elizabeth Warren of Massachusetts appears to have received a slight bounce after her big speech at the Democratic National Convention, according to a new poll released Monday.

The survey was conducted September 13-16, more than a week after Warren gave a rousing address ahead of former President Bill Clinton at the convention in Charlotte, North Carolina.

"The Democratic National Convention appears to have connected the dots for some voters in Massachusetts," said David Paleologos, director of the Suffolk University Political Research Center in Boston. "Warren benefited not only from her own speech, but from the oratory of others, both inside and outside of Massachusetts."

The survey comes one day after a poll by Western New England University indicated Warren has a six-point advantage among likely voters, 50%-44%. Like the Suffolk poll, the margin falls within the poll's sampling error.

Warren and Brown have been in a dead heat for the better part of a year in their Senate contest, one of the most expensive and closely watched congressional races this year. In a May survey by Suffolk, Brown had a one-point edge over Warren, 48% to 47%. The incumbent is defending the seat he won in a 2010 special election to replace the late Ted Kennedy.

Before her campaign, Warren was best known as a watchdog of the government's corporate bailout program, a top financial adviser to President Barack Obama and the force behind a high-profile agency borne from the 2010 Wall Street reform legislation, the Consumer Financial Protection Bureau. She now tries to paint herself as the candidate best equipped to fight for the middle class.

"For many years now, our middle class has been chipped, squeezed, and hammered," she said in her convention speech. "People feel like the system is rigged against them. And here's the painful part: They're right. The system is rigged."

For his part, Brown didn't make a high-profile speech at the GOP convention last month, and he is less than shy about asserting his independent spirit as a Republican in typically Democratic Massachusetts. In a fund-raising appeal Monday, Brown pointed to a recent negative ad by Warren's campaign, the first of her Senate bid, and one to which he responded with his own spot last week.

"Instead of talking about things that matter, like jobs, she's being dishonest about who I am and what I stand for," Brown says in the commercial. "Don't be fooled by Elizabeth Warren's negative attacks. Like a lot of you, I came from nothing. I'm on your side, fighting for the middle class."

The Suffolk poll revealed that while Brown's favorability rating has hardly changed since May, Warren saw a significant increase in the number of voters who say they hold a favorable view of the Democratic candidate. Fifty-two percent have a positive view of Warren, up from 43% in May.

Also notable, 19% of voters who support President Barack Obama said they would cross parties to vote for Brown - a number that has decreased from 24% in May.

The survey, however, indicated some good news for Brown. Fifty percent of voters preferred having a member of each party representing Massachusetts in Washington DC, while 45% said it didn't matter.

"Call it the party-parity-paradox," said Paleologos. "Likely voters of all parties see a benefit to having Democrat John Kerry and Republican Scott Brown representing Massachusetts in the U.S. Senate."
The two face off in their first televised debate Thursday.