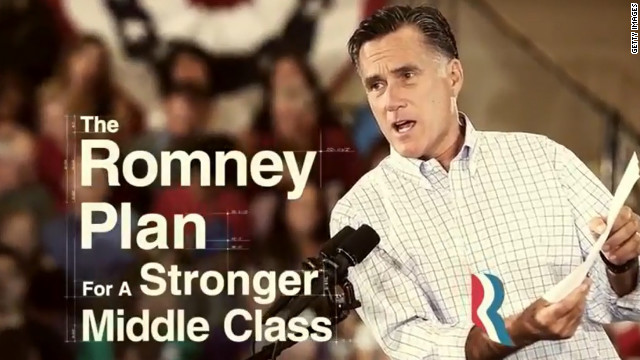 Romney ads focus back on economy

(CNN) - A pair of television ads released Monday by Mitt Romney's campaign shift attention back to the nation's economy, with one spelling out in broad strokes the GOP nominee's plan to help middle-class Americans, and the second hitting President Barack Obama for what are portrayed as failed policies.

In the first ad, a positive 30-second spot, Romney speaks interview-style about a few of the proposals he claims will help bolster earning for middle income Americans and ultimately create 12 million new jobs before the end of a potential first term.

"My plan is to help the middle class," Romney says in the ad. "Trade has to work for America. That means crack down on cheaters like China. That means open up new markets."

The China argument extends from a Romney campaign theme last week, when the GOP candidate hammered Obama for not taking measures to label China a currency manipulator, a designation that would allow the U.S. to more directly confront China over actions that have cheapened their exports, among other consequences. Some critics warn that labeling China a currency manipulator could risk triggering a trade war.

Those three points - ending unfair trade practices, balancing the budget and championing small business - are three of the five components Romney consistently pitches to voters as his plan to fix the still-struggling economy. The other two points are improving education and training, and pushing for energy independence.

The second ad Monday uses a similar format the Romney campaign used last week in a television advertisement slamming Obama for his trade policies with China. Instead of Romney himself, a narrator spells out in dire tones facts about the nation's economy since Obama took office.

"Under Obama, families have lost over $4,000 a year in income," the narrator says, a reference to statistics showing the median household income falling since January 2009, when Obama took office.