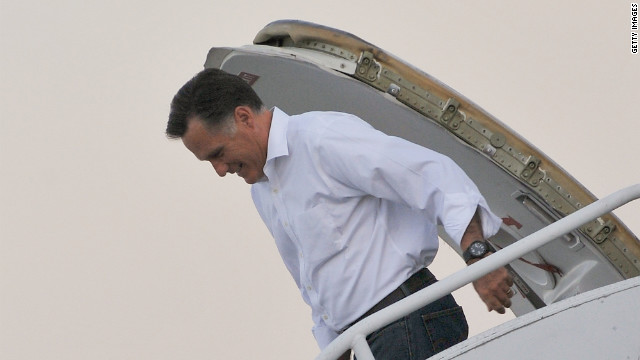 Washington (CNN) – Republican presidential candidate Mitt Romney is launching a new effort this week to inject energy and fresh policy details into a campaign that Republicans have criticized as listless and light on substance.

Romney will deliver a series of high profile speeches in the coming weeks, including one at the Clinton Global Initiative next week in New York City, to flesh out more specifics on what, exactly, Romney would do differently from President Obama if he captures the White House in November.

His first such speech will be Monday afternoon at the U.S. Hispanic Chamber of Commerce in Los Angeles. The campaign said he plans to speak in greater detail about what sort of immigration plan he would implement as president.

The Romney campaign is also launching a new series of television ads Monday addressing Romney's "Plan For A Stronger Middle Class" that mark a departure from the gauzy but light-on-specifics ads the campaign ran in swing states after the GOP convention.

One ad, "The Romney Plan," shows Romney speaking in broad strokes about trade policy, a balanced budget and taxes.

A Romney campaign official acknowledged to CNN that Romney has not done enough to give voters a sense of what he would do if elected.

"Polling shows that voters recognize that Gov. Romney has a plan, but they want more details," said the official, who was granted anonymity to discuss internal campaign strategy. "Voters feel like they want to know more. It's not only true of Gov. Romney but also President Obama."

Romney has two major speeches being drafted for next week: One, at the Clinton Global Initiative, will illuminate fresh elements of Romney's foreign policy vision. Another, at NBC's "Education Nation" summit, will, naturally, focus on education policy.

Romney's running mate Paul Ryan will also take a more aggressive posture on the campaign trail, a source said. Ryan spent the latter part of last week sharply criticizing Obama on a range of issues, from the economy to his handling of the protests in the Middle East to his position on abortion.

That offensive will continue, explained the source, who said Ryan will be "message-focused" on the stump.

The new focus on policy detail comes amid reports of campaign infighting, with chief strategist Stuart Stevens bearing the brunt of the blame for a Republican convention that failed to deliver any serious momentum for Romney.

Campaign sources refused to characterize the new substance offensive as a strategy shift in the face of stagnant poll numbers, even though Republicans in Washington and elsewhere have said privately since the Democratic National Convention that Romney needs to shake up his message if he wants to win.

The Romney official said the latest campaign tweaks are routine at this stage in the race.

"We have got 50 days left and voters are starting to pay attention," the source said. "This is the time for us to clearly communicate what Gov. Romney will do to distinguish himself from President Obama."

Another Romney adviser embraced the challenge of being an underdog and said incumbents typically lead their challengers until the closing days of a campaign.

The adviser said the campaign made a calculated gamble to lay low during the Democratic Convention, even if it allowed President Obama to dominate that week's news cycle and secure a post-convention bump.

"We went dark over the convention and that saved us $20 million and we did it very deliberately knowing that when we came out of the convention we'd have less of a bump," the adviser said. "$20 million is $20 million, and you're competing against that other message. We are very disciplined about it. We would rather spend our $20 million now in an uncluttered environment."

Asked to describe the new tone of the Romney message, the adviser answered, "It's just a winning the election package."