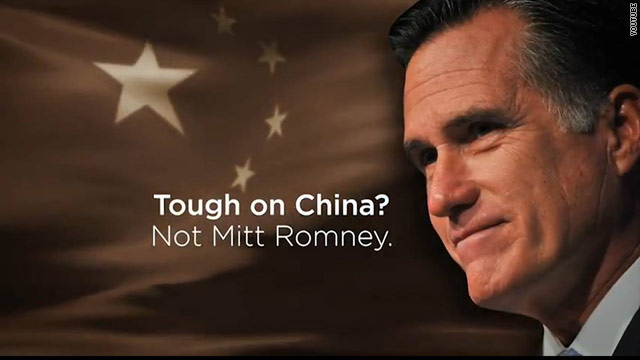 Following a clip of Mitt Romney promising to crack down on China's trade policies, the ad's narrator says, "Tough on China? Not Mitt Romney."

The ad then cites a 2009 U.S. International Trade Commission Federal Register Notice that said China was importing tires "In Such Increased Quantities Or Under Such Conditions As To Cause Or Threaten To Cause Market Disruption To The Domestic Producers Of Like Or Directly Competitive Products."

"When a flood of Chinese tires threatened a thousand American jobs it was President Obama who stood up to China and protected American workers," says the narrator.

A release about the ad points to media reports about Obama imposing stiff tariffs on Chinese-made tires to protect America jobs.

The narrator continues: "Mitt Romney attacked Obama's decision…said standing up to China was 'bad for the nation and our workers'."

The ad concludes by questioning whose side Romney is on pointing to an excerpt from Romney's book "No Apologies" where he criticizes the trade case filed on behalf of U.S. tire manufacturers saying it could spark a trade war.

The Obama campaign said the commercial will air on national cable but did not release the size of the ad buy.

Republicans, however, have criticized Obama for projecting weakness abroad in his foreign policy, and Romney's campaign has said the Obama administration's new case against China is politically motivated. The Republican's campaign released an ad last week attacking the president for failing to get tough on currency manipulation as well as other Chinese trade policies.

President Obama, campaigning in the battleground state of Ohio earlier Monday, told supporters "(Romney's) experience has been owning companies that were called 'pioneers' in the business of outsourcing jobs to countries like China. Pioneers! Ohio, you can't stand up to China when all you've done is send them our jobs."