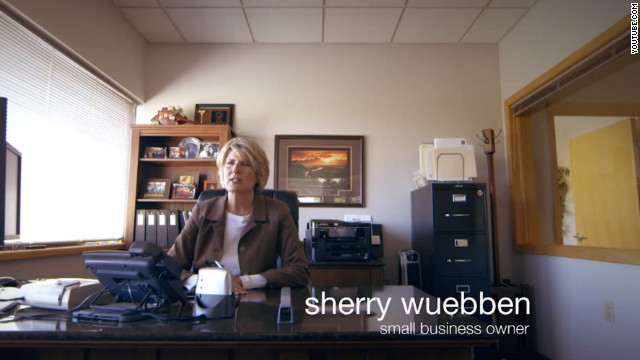 An $8.3 million buy of time for one week in eight states will target Obama, while a $2.3 million ad buy will target Democrats in four hotly contested Senate rates and one House race.

The ad critical of Obama features two business people arguing he has increased their costs and regulations.

"Small businesses like ours are what have driven this country, and President Obama just doesn't seem to understand that," Sherry Wuebben says. Bill Schams says, "If he has four more years, I don't think we're going to want to see what it looks like."

The spot airing in Montana criticizes Tester for having "gone Washington."

"Today, Tester looks a lot like Washington. Tester has taken more money from lobbyists than any other Senator running this year."

In mid-August, Crossroads announced an ad critical of him, as well as one aimed at Baldwin of Wisconsin.

The spot against her bid for Senate says she is "what's wrong with Washington."

Baldwin Communications Director John Kraus responded in a statement, "Tammy Baldwin has fought for Wisconsin's middle class and taken on the big moneyed special interests behind this attack. Now they are trying to hold on to the power and influence they have in Washington and prop up one of their friends, Tommy Thompson, because they know he will continue working for them in Senate."

In Nevada, Crossroads again targeted Berkley, making this their second spot against her in the last month. Titled "Shameful," text in the ad says she supports "jeopardizing care for seniors" while the narrator says she favors "slashing Medicare spending" while "enriching herself."

"Heidi Heitkamp supports the law," the narrator says. "Even though it raises taxes on the middle class and cuts Medicare spending by $716 billion, Heitkamp opposes repeal."

A CNN Fact Check of the claim has cast doubt on that Medicare claim when it was advanced by the Romney campaign.

A spokesman for Heitkamp, Brandon Lorenz, responded, "Heidi believes there is good and bad in the health care law, and we should keep the good and fix the bad."

"Heidi would never vote to take away care from seniors, but Rep. Berg has voted to go back to a time when we could deny care to people with pre-existing conditions, and to repeal the Frontier Amendment, which means a $650 million cut to Medicare funding for North Dakota hospitals," Lorenz said in a statement.

The ad against Bishop, the incumbent in NY-1, questions his "priorities" and "judgment," highlighting reports of "calls for investigations for abusing his power."

Bishop's race is rated as leaning Democratic (on a scale of toss up, lean, likely, and safe) by the Capitol Hill publication Roll Call.

Crossroads previously targeted the congressman in July 2011, when it hit Bishop and nine other Democrats with ads criticizing them of supporting "reckless spending and debt."

The conservative group, backed by GOP strategist Karl Rove, has spent millions this year on ads in congressional races.